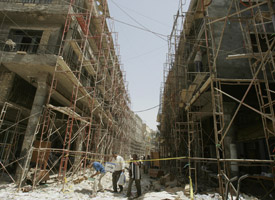 It seems the U.S. and Iraq are nearing a deal for American forces in Iraq. Whether the GIs are staying or going home ($) in the next few years isn't clear (and anyway, these are "aspirational timetables," as Secretary of State Condoleezza Rice put it). But security agreements aside, one thing that's increasingly clear is that Iraq isn't exactly mustering its full financial resources to reconstruct the country.

A GAO report released earlier this month concluded that Iraq was basically rolling in the dough. Benefitting from record oil prices, Iraq's budget surplus is estimated to reach near $80 billion by the end of the year.

The report must have raised some hackles in Baghdad. Iraqi officials did some math and offered their own numbers to the New York Times. As the Timesexplains today:

Iraqi Finance Ministry officials provided the new figures to The New York Times in the hope of countering that criticism, saying they spent 57 percent of their annual reconstruction budget in the first half of 2008 -- a clear sign of improvement.

There's just one problem. Well, actually, there are many. The numbers are basically bogus and based on a series of quite creative accounting moves. For example, the Times points out "Iraqi officials define money they intend to spend as money already spent." There is also the slight problem that "the Iraqi math appears to be incorrect."

The Times re-crunched the numbers and concluded that Iraq's spending on reconstruction is "less than a third of the rate claimed by Iraqi officials." Once the Times stripped away all the flim-flam, it estimated that the Iraqi government has actually spent just under nine percent of its budget this year on reconstruction.

And even that might overstate the help. "Is there any evidence that they're actually providing public goods?" one reconstruction expert told the Times. "Because expenditures by themselves, or the stated financial tables, don't tell you that."

Iraqi officials don't seem overly disturbed by the latest criticisms or the notion that they should be spending more of their budget surplus. The needs are just too big. "We have a shortage in housing, at least two million units," said Iraq's finance minister. "What is $20 billion? It's nothing."