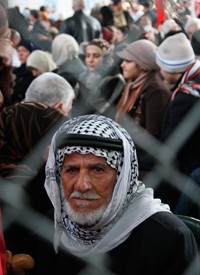 Despite the relatively good news coming from Iraq, experts testifying at a U.S. Senate subcommittee hearing yesterday said that while the pace of new displacement has fallen off in recent months, only a fraction of Iraqi refugees have begun returning home. "Regardless of what the (Iraqi) government says, they don't feel safe to return home and they don't feel necessarily they'll have the things they need," said Nancy Aossey, president and CEO of the nonprofit relief agency International Medical Corps.

The number of Iraqis living outside of their homes remains in dispute; the U.N. places the figure at 4.7 million. How quickly they return is viewed by many as a bellwether of Iraqi stability, with implications for regional security and U.S. military efforts.

Sectarian violence forced Sunni, Shi'i and Kurdish Iraqis to disperse into separate enclaves, resulting in a "remapping" of Iraq, the University of Mary Washington's Nabil Al-Tikriti told the committee. The homes of the displaced have often been occupied by displaced Iraqis from other regions, presenting a puzzle-like set of property issues to be resolved. Poor job prospects and lack of essential services also hinder return.

Thus far, only a few thousand Iraqis are thought to have crossed back into the country from Syria, Jordan and other nations. Some Iraqis abroad are well-off, but many live in destitution among impoverished urban communities in Damascus and Amman, where they are not permitted to seek formal employment. "It is worth considering whether the Iraqi refugees will come to be seen as the new Palestinians," Ellen Laipson of the Henry L. Stimson Center told the senators. "(They) have the potential to change the politics of the region for generations."

Last month, the Obama administration announced additional funds to support displaced and conflict-affected Iraqis in Iraq, Jordan and Syria in the current budget year, bringing the U.S. commitment so far this year to roughly $150 million; in 2008 the U.S. contributed $400 million. Al-Tikriti said the U.S. has been criticized for failing to invest more robustly. "Much of the international community feels that this is primarily a U.S. crisis and the U.S. should be primarily responsible for dealing with it."

The U.S. has also come under criticism for resettling relatively few Iraqis and failing to provide asylum seekers adequate assistance once they reach the U.S. "They're only getting a few weeks' support and then they're on their own," Al-Tikriti said.

All of the experts urged improved coordination between U.S. government agencies dealing with the Iraqi refugee crisis. A new report on Iraqi displacement by the congressionally funded U.S. Institute of Peace is expected later this week.