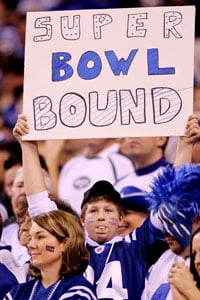 Journalism folks from California to New England are joining our Super Bowl Blitz. The effort, launched on Tuesday, aims to find out which members of Congress are attending this year's Super Bowl and how they got their tickets. We know the NFL sets aside a large number of tickets for public officials and corporations to buy at face value. And those tickets can be used to give congressmen perks. But we don't know yet who's getting what. That's where you come in.

Over at California Watch reporter Chase Davis published the call-list for California, and is asking his readers to report in to him. Wisconsin representatives and senators will be dialed by folks at the Wisconsin Center for Investigative Journalism. The New England Center for Investigative Reporting has almost made it through Massachusetts, thanks to the hard work of Lyle Moran and Sydney Lupkin. They're still looking for an answer from Senator-elect Scott Brown.

There's still plenty of "thank you's" to go around. Crain's New York Business finished almost all of New York City Tuesday. Edward Marshall, a political producer with WBBM TV News in Chicago, has almost cleared Chicago. John Hockenberry at the Takeaway, a co-production of Public Radio International and WNYC, is asking his listeners to make calls. And Amanda Zamora at Huffington Post's Investigative Fund is asking the Huffington Post's readers to start dialing, too.

So far, we've heard of one legislator who will be attending the big game: Rep. John Conyers, D-Mich. You can join him at the game and at a fundraiser after for $5,000.