Some are already calling it a landmark ruling. Senior White House aides are not immune from congressional subpoenas, a federal judge ruled (PDF) today. 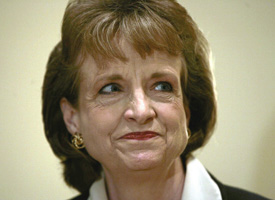 It’s not yet clear if the White House will appeal. If it chooses not to, former White House counsel Harriet Miers will have to appear before the House Judiciary Committee to answer questions about the firings of U.S. attorneys. The White House and Justice Department had argued that executive privilege shielded Miers from even having to appear. White House Chief of Staff Josh Bolten would also have to respond to the panel’s subpoena for documents related to the firings.

Congress’ investigation of the firings has effectively been on hold since last summer as a result of the White House’s refusal to provide former top aides like Miers and Karl Rove. The House sued to force a decision after Attorney General Michael Mukasey refused to enforce the House’s citation of Miers and Bolten for contempt of Congress.

Judge John Bates -- appointed by President George W. Bush in 2001 -- stresses that this decision is “very limited.” Miers and Bolten can still assert executive privilege to specific questions or requests. But they’ve got to do it on a case-by-case basis.