Nearly everyone agrees that something went very wrong with the mortgage industry. Mortgage lenders made extremely risky loans. Wall Street banks hyped securities that were backed by such loans. In the continuing wake of the crisis, the Justice Department has launched a range of investigations and prosecutions of behavior that might have gone beyond risky or irresponsible to criminal. Here’s a rundown of exactly what skullduggery the feds are looking for. 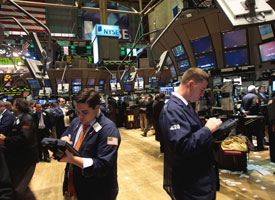 The investigations reflect the complex, interwoven nature of the meltdown itself. They range from mortgage fraud by small-time operators all the way to corporate fraud by companies that were once among the biggest mortgage lenders in the U.S. and securities fraud at major Wall Street banks.

The FBI hasn't named the corporations, but reports have fingered a few. Last week, the Los Angeles Timesreported that a federal grand jury had issued subpoenas to Countrywide, New Century and IndyMac, three of the country's largest subprime mortgage lenders.

The scope of that investigation is itself varied, according to the Times. Aspects reportedly include the V.I.P. loans that Countrywide CEO Angelo Mozilo provided to influential public officials, such as members of Congress, congressional staffers and a federal judge. Also of interest to investigators, reported the Times, is "whether securities investors were defrauded about the value of subprime mortgages they purchased, as well as other possible crimes such as insider trading by corporate officials." Representatives for Countrywide and IndyMac declined to comment on the subpoenas. A spokesman for New Century did not reply for a request for comment.

The Justice Department filed its first major indictment last month, accusing two Bear Stearns hedge fund managers of securities fraud for misleading investors. The funds, which invested heavily in mortgage-backed securities, collapsed last summer, resulting in approximately $1.4 billion in losses to investors. One manager was also indicted for unloading $2 million of his own shares in the fund while hiding his concerns from investors. Both managers have pleaded not guilty, and their lawyers argue the two are being made scapegoats for the market crisis.

Alongside such high-profile prosecutions, the Justice Department has also charged more than 400 defendants with mortgage fraud in the last several months as part of "Operation Malicious Mortgage." A recent guilty plea in New York is a typical example: Dominick Devito admitted to buying up millions in real estate with phony mortgage loan applications. The FBI says it has more than 1,400 open mortgage fraud cases.