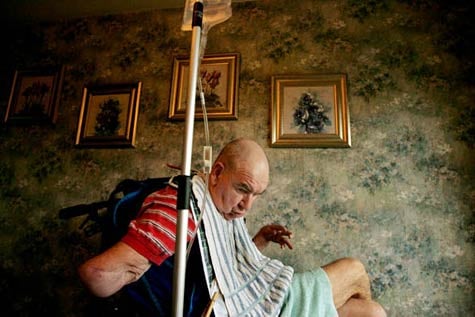 Reporting from Central Point, Ore. – A nurse rocked him awake as pale dawn light crept into the room. "C'mon now, c'mon," the nurse murmured. "Time to get up."

Reggie Lane was once a hulking man of 260 pounds. Friends called him "Big Dad." Now, he weighed less than 200 pounds and his brain was severely damaged. He groaned angry, wordless cries.

The nurse moved fast. Two bursts of deodorant spray under each useless arm. Then he dressed Lane and used a mechanical arm to hoist him into a wheelchair.

He wheeled Big Dad down a hallway and parked the chair in a beige dining room, in front of a picture window. Outside stretched a green valley of pear trees filled with white blossoms.

Lane's head fell forward, his chin buried in his chest. His legs crossed and uncrossed involuntarily. His left index finger was rigid and pointed, as if frozen in permanent accusation. 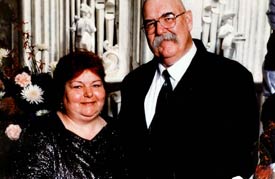 In 2004, Lane was driving a fuel truck in Iraq for a defense contractor when insurgents attacked his convoy with rocket-propelled grenades. For most of the five years since, Lane, now 60, has spent his days in silence -- a reminder of the hidden costs of relying on civilian contract workers to support the U.S. war effort.

His wife, Linda, said visiting her husband was difficult. They were childhood friends and fiercely loyal to each other. On this spring morning, she caressed his hand and told him she loved him.

"He was a good man. He paid his bills. He took care of his family," she said, her breathing labored from a pulmonary disease. "He's a human being who fought for his country. He doesn't deserve to be thrown away."

In Iraq and Afghanistan, the U.S. military has depended on contract workers more than in any previous conflict -- to cook meals for troops, wash laundry, deliver supplies and protect diplomats, among other tasks. Tens of thousands of civilians have worked in the two battle zones, often facing the same dangers as U.S. troops and suffering the same kinds of injuries.

Contract workers from the U.S. have been mostly men, primarily middle-aged, many of them military veterans drawn by money, patriotism or both, according to interviews and public records. They are police officers, truck drivers, firefighters, mechanics and craftsmen, mostly from rural corners of America, especially the South.

Nearly 1,600 civilian workers -- both Americans and foreign nationals -- have died in the two war zones. Thousands more have been injured. (More than 5,200 U.S. service members have been killed and 35,000 wounded.)

Many of the civilians have come home as military veterans in all but name, sometimes with lifelong disabilities but without the support network available to returning troops. 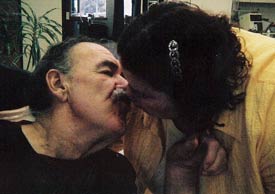 There are no veterans' halls for civilian workers, no Gold Star Wives, no military hospitals. Politicians pay little attention to their problems, and the military has not publicized their contributions.

"These guys are like the Vietnam vets of this generation," said Lee Frederiksen, a psychologist who worked for Mission Critical Psychological Services, a Chicago-based firm that provides counseling for war zone workers. "The normal support that you would get if you were injured in the line of duty as a police officer or if you were injured in the military . . . just doesn't exist."

Herbert J. Lanese, former chief executive of DynCorp International, one of the largest employers of civilian workers in Iraq and Afghanistan, said: "These are people who have given their lives in the service of our country. They are the unappreciated patriots of our country at this point in time."

Lane was born in Ventura and moved to Grants Pass, Ore., when he turned 12. He met Linda there, and the two grew up together.

After high school, Reggie enlisted in the Army and went to Vietnam. He and Linda found each other after he returned. By then, each had been married and divorced, and each had a child.

As a pair, they were inseparable. Reggie was steady, strong. Linda was energetic and outgoing. They eventually found work as a truck-driving team, steering tractor-trailers across the country.

His CB radio handle was "Grizzly." Hers was "Wild Cat." He loved country music and Tom Clancy novels, G. Gordon Liddy's talk show and Honda motorcycles. She loved the open road, the speed of the truck.

"We went to see the big wide world driving a truck. What an adventure," Linda recalled.

But work was haphazard, and the pay was modest. Together, they made about $32,000 a year. They had a hard time keeping up with bills and twice filed for bankruptcy.

In the late 1990s, they sold their home in Oregon and moved to Montana, where land was cheaper.

In the fall of 2003, Linda heard that defense contractor KBR Inc. was hiring truck drivers to deliver fuel, food and supplies for the military in Iraq. The salary was $88,000 a year, more than they had ever earned.

By November, Reggie was on his way to Iraq. He arrived during a turbulent period, with the insurgency raging. Convoys regularly came under attack. The trucks were not armored. 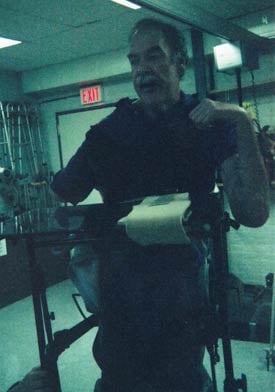 "He didn't go over there to fight a war. He went over there because [KBR] said, 'You'll have armed guards,' " Linda said. "They promised big money. 'You'll be protected, no problem.' "

On April 9, 2004, Reggie Lane and a friend, Jason Hurd, rolled out of a base south of Baghdad to deliver fuel to Balad, north of the city. The convoy was outside Baghdad when gunfire rang out. Hurd saw Reggie's truck careen to the side of the road.

Hurd pulled over. A rocket-propelled grenade had shattered the windshield. Reggie was lying face-up on the shoulder of the road. His right arm was gone below the elbow. His face was covered in shrapnel wounds. He was drenched in blood.

The rest of the convoy moved ahead, apparently oblivious. Hurd fumbled with Reggie's arm, trying to apply a tourniquet. Then a group of military vehicles pulled over to help.

Soldiers helped stabilize Lane, who shuddered awake and asked for water. An Army helicopter evacuated him to a U.S. base, where he was put on an emergency flight to Germany.

Linda got the news from a military doctor. A few days later, Reggie called. He told her not to worry.

"I still got one arm left to hug you with," he said.

It was the last conversation she would have with her husband.

Two days later, another military doctor in Germany called Linda, asking permission to perform an emergency tracheotomy on Reggie. A blood clot had dislodged, blocking the flow of blood to his brain.

"My head is spinning. I'm trying to digest what they're telling me," Linda said. "I'm deciding this long-distance by phone, and it's someone I love."

Ten days after the attack, Reggie Lane was on a flight back to the U.S., headed to a Houston hospital. KBR paid to have Linda meet her husband in Texas.

She was unprepared for the sight. A raw, red stump was all that remained of his right arm. There was a hole in his throat. She could see his intestines, which were left exposed to aid in cleaning out shrapnel. His body was swollen and purple. He was unresponsive, his pupils mere pinpoints.

Over the next nine months, Linda lived out of a hotel in downtown Houston. She became her husband's advocate, navigating a complex medical world with little guidance.

"It was a lot of one foot in front of the other. I was pretty devastated," she said.

Slowly, Lane's condition improved. Toward the end of his hospital stay, he could respond to questions. He would say: "Love Linda." He was trying to stand up with help.

"By the time he left, he was interacting, communicating," said Dr. Sunil Kothari, a neurosurgeon who coordinated Reggie's care at the Institute for Rehabilitation and Research (TIRR) Memorial Hermann in Houston, one of the country's top rehabilitation hospitals for brain injury. "Near the end, he was beginning to answer questions, starting to vocalize."

In January 2005, doctors cleared Reggie for release. He was going home.

Grants Pass had a handful of nursing homes. They provided physical and speech therapy, but Linda was dissatisfied with the care. She confronted workers at one home, leading to Reggie's discharge. He returned to a hospital.

Linda was dealing with her own health problems. Her weight ballooned. She was admitted to the hospital repeatedly with breathing difficulties.

As Linda searched for a home for her husband, she got into a dispute with American International Group Inc., the insurance carrier for KBR. Linda wanted her husband close to home. She said AIG insisted that he go to a facility in Portland, where care was less expensive than in the hospital.

Troops injured in Iraq are guaranteed care at Veterans Affairs facilities. In contrast, contract workers depend on workers' compensation insurance paid for by the federal government under the Defense Base Act. They often must fight with insurers to get medical bills paid.

Linda hired a lawyer, and AIG relented, allowing Reggie to be placed in an adult foster care home near Grants Pass.

The lawyer, Roger Hawkins of Los Angeles, said it was the least Reggie deserved.

"You look in his eyes and you see that somewhere, he realizes what is going on," Hawkins said. "He's sitting there with his arm missing and knowing that he's never going to get better."

AIG and KBR declined to comment on the case.

Reggie's mental state had gradually declined since he'd left Houston. Before, he spoke. Now he descended into long silences broken only by grunts.

Told of Lane's condition, Kothari, who treated him in Houston, expressed concern.

"Decline is not typical," Kothari said. "If someone goes to a nursing facility, if they happen not to get stimuli, it means the brain could not heal as well as it would otherwise."

Jim Gregg, operator of the foster care home where Lane was placed, said the facility was not equipped for advanced physical or speech therapy. In their home on a 4-acre farm, Gregg and his wife provided basic medical care and monitoring to half a dozen elderly patients.

"It's a boring life. He just sits here," Gregg said. "It's not a stimulating environment."

Gregg closed his facility earlier this year, and Lane was moved to another foster home. The total cost of Lane's care for the rest of his life could be as much as $8.9 million, according to an AIG estimate. The bill will be paid by the federal government, which reimburses insurers for combat-related claims from war zone workers.

Reggie let out a wail when relatives told him the news. "I had never heard anything like that before," said Bev Glasgow, who runs Lane's current foster home.

Glasgow arranged for a van to take Reggie to a memorial service for his wife. It was held in a state park alongside the Rogue River. Under the shade of scrub oak and aspen, he watched as Linda's family and friends sang "Amazing Grace" and looked at old photos of the couple.

Diane Firestone, Reggie's sister, visited him shortly after Linda's death. She said the family accepted that Reggie's condition was unlikely to change. But, she said, they did not believe his sacrifices had been adequately recognized, by his company or the country.

She knelt beside her brother and asked him about the attack on his convoy.

This story is part of our ongoing coverage of injured war zone contractors. 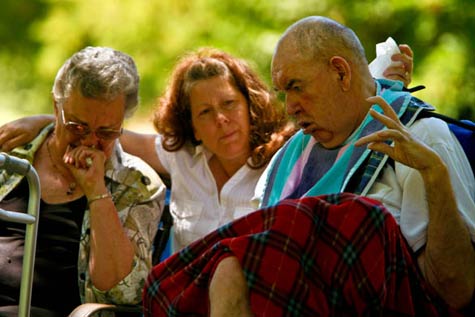