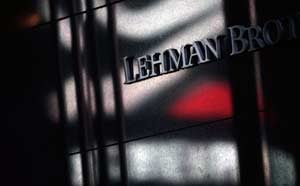 If any more proof is needed that the intersection between the government and the financial sector has become hopelessly convoluted, look no further than Aurora Bank. Until this thrift recently shed its name, à la AIG (which is still picking a new moniker), it was known as Lehman Brothers Bank, a division of the now-bankrupt holding company of the same name. Since Lehman is synonymous with bankruptcy, the still-active but wobbly thrift renamed itself Aurora Bank last month.  It got the name from its own less controversial subsidiary, Aurora Loan Services.

While Aurora Bank is not officially part of the Lehman bankruptcy, it’s in enough trouble that federal regulators have stepped in and now control most of its actions. And while Aurora Loan Services was an industry leader in peddling some of the worst mortgage products – loans that contributed to Lehman’s bankruptcy – it just received a commitment of an estimated $798 million from the U.S. Treasury as part of a bailout program to help homeowners adjust their mortgages.

So, to sum up: One troubled bank on regulator-monitored life support houses one mortgage servicer using taxpayer millions to modify its portfolio of dodgy loans.

It remains to be seen how the Treasury Department’s loan modification program will affect the thrift’s bottom line. Aurora Loan Services will not receive money from Treasury all at once. Under the program, it  will be paid for each troubled mortgage it modifies according to a system of incentive payments. Some of the Treasury payments will also be passed through Aurora to pay down the principal of borrowers who keep current on their payments after modification.

Aurora, the loan servicer, has more than 490,000 loans worth about $116 billion, according to bankruptcy court filings, including some that originated with other mortgage providers. Lehman Brothers Holdings tried to shop around Aurora Loan Services at the end of last year; it found no takers, according to National Mortgage News.  During the heady days in the middle of the decade, Aurora helped make Lehman immensely profitable. It was the biggest supplier of loans for Lehman’s securitization factory, according to the Toronto Globe and Mail. Aurora specialized in Alt-A loans, one cut above subprime and generally offered to people with good credit scores, although often with little or no verification of their income. Lehman used its thrift and loan service business to provide a steady stream of mortgages it could carve into tranches to sell as securities. Unfortunately for Lehman, it held on to many of those securities. Plunging shares and mounting losses forced it into bankruptcy last Sept. 15.

As a federally insured financial institution, the thrift escaped becoming part of the bankruptcy proceedings. Yet it was hardly the model of prosperity. In September 2007, at the tail end of the boom, it had assets of $17.7 billion. At the time of the holding company’s failure, that had shrunk to a little more than $7 billion. The bank’s woeful shape compelled its primary regulator, the Office of Thrift Supervision, into action. In January 2009, the OTS issued a cease and desist order on Lehman Brothers Bank to stop its "unsafe or unsound practices and violations." The regulator’s main complaint was that the thrift was operating without enough capital in case its loans continued to worsen.

The order limited the ability of the bank to increase its assets and accept certain kinds of deposits. It also forbade it to  enter into any third-party contracts without the go-ahead of the OTS. Officials with Aurora Bank and the OTS declined to comment for this story.

Failure to comply with the order would have put the thrift into receivership at considerable cost to the FDIC’s deposit fund. It would also have deprived Lehman’s creditors who are trying to recover what they can in bankruptcy court. Lehman Brothers Holdings has almost half a billion dollars in equity in the thrift, according to bankruptcy filings. Given the financial consequences if the thrift collapsed, it’s in the interest of both the creditors and the federal government to keep the bank afloat, at least for now.

On Feb. 11, Lehman Brothers Holdings, the father of this corporate catastrophe, asked the Bankruptcy Court in New York’s Southern District to allow it to give $15 million to the bank. A month later the bank received further approval from the court to provide up to $325 million to the bank, to be used by Aurora Loan Services to finance its operations.