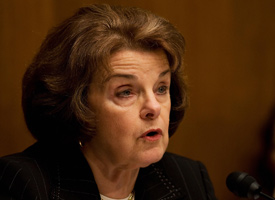 One day after federally rescued insurance giant AIG announced that it was suspending its lobbying, Sen. Dianne Feinstein has announced a bill to prevent other rescued companies from using taxpayer dollars for lobbying.

"Federal dollars were not intended to be used for lobbying, and it would be unconscionable for these companies to misuse taxpayer dollars in this way," Feinstein said in a statement.

The legislation would prevent government loans that companies received as part of the recent bailout package from going to lobbying. What it doesn't do is impose a total ban on lobbying, so its effect is unclear.

"I don't know what kind of impact it's going to have," said Fred Wertheimer, president of Democracy 21, a nonpartisan government watchdog organization. "The banks are left free to use other resources to pay for lobbying expenses."

ProPublica reported earlier this month that AIG was still lobbying after the federal government gave the company $120 billion in bailout loans last month.

Feinstein plans to introduce her plan when Congress returns to session after the election.

A Boy With an Autoimmune Disease Was Ready to Learn in Person. Then His State Banned Mask Mandates.

We Looked for Some of the Hottest Places in California. We Found Climate Injustice in a Nutshell.