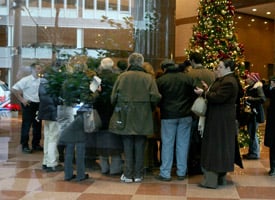 Bernard Madoff, a Wall Street kingpin who'd once been the chairman of the Nasdaq Stock Market, was arrested yesterday. The reason, as he patiently explained to federal agents yesterday, was his top performing money management business was "all just one big lie." He'd lost at least $50 billion of his clients money, he told them.

If that's true, it's a "stunning fraud" of "epic proportions," says the SEC. It could be "the largest in Wall Street's history," reports the New York Times.

Nobody yet knows for sure just how much Madoff blew. Madoff's top executives -- reportedly his two sons -- appear to have only learned of the fraud on Tuesday. Madoff was arrested on Thursday. As a result, the SEC complaint (PDF) and criminal complaint (PDF) filed by the U.S. attorney in Manhattan rely exclusively on Madoff's confession to running "a giant Ponzi scheme." He'd been paying returns to his investors from the principal from other investors, and he'd finally run out of money.

All that's clear from the criminal complaint is:

How long was Madoff running his Ponzi scheme? The SEC complaint says "at least" since 2005. Madoff has been in business for nearly 50 years. And both the Wall Street Journal and the Times note that there had long been skepticism about the remarkable consistency of his returns -- clockwork monthly gains usually around one percent.

Whatever its scope, Madoff appears to have accomplished his scheme by keeping absolute control over any and all information about his money management business.

Madoff had two parts to his business: a brokerage called Bernard L. Madoff Investment Securities LLC and his investment advisory biz. Madoff ran his advising business on a separate floor and kept its financial statements "under lock and key," according to the complaint. Even his sons -- identified in the complaint as Senior Employees No. 1 and No. 2 but named by the Journal -- knew little about the business. The firm's clients were institutional investors and wealthy individuals, who reportedly knew little about how their money was managed, but were understandably happy with Madoff's ability to deliver consistent returns -- even amidst the recent crisis.

After Madoff had revealed the fraud to his sons, they contacted their lawyer, who contacted federal authorities, according to the Journal. The feds made their visit yesterday. When they arrived, Madoff was not surprised, a FBI agent writes in the complaint.

"We're here to find out if there's an innocent explanation," the agent said.

"There is no innocent explanation," Madoff replied.