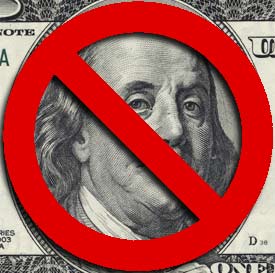 There has been ample grumbling from bankers who took the Treasury Department’s money. Now, it seems we have our first bank to actually follow through and return the money.

The Treasury bought $90 million worth of preferred stock in IberiaBank, based in Lafayette, Louisiana, on Dec. 5. Yesterday, the bank announced it has given the Treasury notice that the money is coming right back. The reason, says the bank’s CEO in a press release: "We believe recent actions, interpretations, and commentary regarding various aspects of the program places our Company at an unacceptable competitive disadvantage."

Not the clearest explanation, to be sure. (Our call to the bank for a clearer take wasn’t immediately returned.) Another CEO from a Louisiana bank, MidSouth, was plainer about his discontent last week: "They're talking about attaching all sorts of strings to the money… The Treasury needs to stop listening to the special interests of the 'too big to fail' banks that got us into this trouble and break them up. And at the same time it should back away from community banks and let us do what we're supposed to do with the TARP funds – lend the money."

Clearly the bailout isn’t popular, and the bankers are unhappy about the added compensation limits and public pressure to lend. Under the new limits passed by Congress earlier this month, the five most highly compensated execs at IberiaBank would have seen their bonuses limited.

IberiaBank announced that it will be delivering about $575,000 in dividends to the Treasury along with the $90 million investment on Mar. 31. A Treasury spokesman told ProPublica it did receive the bank’s request and said the redemption should take place without a hitch.

The Treasury has invested in more than 400 banks throughout the country and has been signing up more and more weekly, as you can see on our running tally.

About 162 banks have announced that they won’t be taking the Treasury’s cash, according to the investment firm Keefe, Bruyette, and Woods, but this is the first time that a bank has taken the money and then given it back. A sign of things to come?