Spoiler alert: This article discusses key scenes from the film.

J.C. Chandor has embraced Rahm Emanuel's dictum "never let a serious crisis go to waste." The 37-year-old writer and director used the financial crisis as a springboard to create the most insightful Wall Street movie ever filmed. Margin Call captures a day in the life of a Lehman Brothers-like bank as it scrambles to avoid falling into the first cracks of the financial crisis. Briskly paced and marvelously acted, the movie reveals how large financial institutions operate and the motivations of the people who work within them.

Margin Call should not be confused with journalism. It is not a precise overlay of the financial crisis. You'll never hear the words collateralized debt obligations uttered in the movie. As the reporting I did with my colleague Jesse Eisinger showed, the Wall Street behavior that helped create the financial crisis was often much worse than what's depicted in the movie. Chandor isn't looking for villians or lengthy explanations. He's mining deeper truths than the intricacies of credit default swaps. The societal costs of high finance, the power of self-rationalization, and the easy embrace of personal corruption is his terrain.

As reporters covering the beat know, Wall Street is a reluctant participant in introspection. Journalists investigating the Street have to pierce a code of omertà, borne of the fear of lawsuits and federal investigations. No one wants to have the reputation of being a snitch in an industry where hiring and bonuses are based on relationships as much as quarterly results. The truth is even more tightly held when it hides the origins of financial disaster, but even in the best of times, these are not, by nature, navel gazers. Traders and market makers are like sharks, always wanting to move forward, onto the next deal. There is no percentage in looking back.

All you need to know about the moral universe Margin Call inhabits is on display in the opening scene of the movie. The downturn has begun. The firing squad -- represented by two women in identical business suits -- arrives on the trading floor trailed by underlings carrying cardboard boxes to cart away personal effects. When they come into view, a series of swift reactions plays across the face of Will Emerson, a senior trader acted brilliantly by Paul Bettany. First fear. Then dismay. And finally, relief and dismissal. After 80 percent of the floor is axed, Emerson's boss, Sam, a wan Kevin Spacey, gives a pep talk to the traders left standing. "They were good. You are better. Now they are gone. They are not to be thought of again."

Among the casaulties is the risk manager for the trading group, Eric Dale, played by Stanley Tucci. On the way out the door, Dale tells his young protege, Peter Sullivan, that he has been working on something important. As the elevator closes, he hands Sullivan a zip drive and says cryptically, "Be careful." 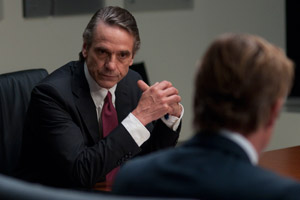 Sullivan, played by Zachary Quinto, who also helped produce the movie, waits until the office clears for the night and then dives into the figures. To his horror, he discovers the bank is massively overleveraged. If trends continue, projected losses are much greater than the value of the firm. Upon learning how dire the situation has become, the CEO John Tuld, portrayed by a scene-chewing Jeremy Irons, says, "So what you are telling me is that the music is about to stop and we are going to be left holding the biggest bag of oderous excrement ever assembled in the history of capitalism."

Sullivan is the questioning heart of Margin Call. He has a doctorate in engineering with a speciality in propulsion -- literally a rocket scientist. And like so many of the best and brightest of his generation, he turned to Wall Street, where Chandor clearly believes his gain is society's loss. When one of his superiors asks Sullivan why he has foresaken engineering, he responds: "It's all just numbers really, just changing what you are adding up, and to speak freely, the money here is considerably more attractive."

Sullivan operates in the constricted space of the Wall Street risk manager. Risk managers and accountants are among the few who actually know what the numbers mean. They see the whole picture. It's a running joke through the movie that Sullivan's bosses, right up to the CEO, don't understand the financial wizardry behind the products they make and sell. When confronted with Sullivan's analysis, Sam says, "Oh Jesus, you know I can't read these things. Just speak to me in English."

The risk manager is not in sales, which is the heart and soul of the institution. He or she only offers recommendations. Throughout Margin Call there are a number of references to warnings unheeded. And indeed, in the real world, the success of investment banks at subverting their risk management rules correlated nicely with how badly they fared when the crisis hit. In the ultimate irony, when it's time for someone to take the fall for the firm's risk taking, it's the head of risk management, played by Demi Moore who is pushed to the scaffold.

Sullivan and his side-kick Seth, played by Penn Badgley, are still new enough to the system to be doubtful of its utility. Seth is enamored with the money Wall Street offers and particularly impressed by his boss Will Emerson, who pulled down $2.5 million the previous year. They briefly wonder whether that's "right," but push the unwelcome thought away unanswered.

When Emerson tells the eager young men that "you learn to spend what is in your pocket" and that most of his money is gone, they are incredulous. He itemizes his expenses for them, including $76,520 for hookers, booze and dancers. Their adulation only increases when he admits he claimed most of that back as entertainment expenses.

Later when Seth bemoans the fact that normal people will be hurt by their actions, Emerson's ferocious response is shocking both for its amorality and its kernels of truth.

"If you really want to do this with your life you have to believe that you're necessary. And you are. People want to live like this in their cars and their big fucking houses that they can't even pay for? Then you're necessary. The only reason they all get to continue living like kings is because we've got our fingers on the scales in their favor. I take my hand off and the whole world gets really fucking fair really fucking quickly and nobody actually wants that. They say they do but they don't. They want what we have to give them, but they also want to play innocent and pretend they have no idea where it came from. That's more hypocrisy than I'm willing to swallow. Fuck them. Fuck normal people."

Faced with the pile of excrement on the books, the archly named Tuld (Lehman Brothers CEO was Dick Fuld) decides the bank must unload it, and quickly, before customers wise up. At this point, the movie could just as easily be called, "Damage Control: When Greed Turns to Fear."

Sam tries to talk Tuld out of his plan. "If you do this, you will kill the market for years. It's over. And you are selling something that you know has no value," he says.

Tuld responds with the excuse every Wall Street executive used when investigators came calling after the shit hit the investors: "We are selling to willing buyers at the current fair market price so that we may survive."

In the real world, the buyers were not as sophisticated and the deals not as transparant as bankers claimed.

The House always wins, Emerson tells his young charges. The corollary is that everybody is for sale. Indeed, anyone who has qualms in the movie finds the right price for their acquiesence. In this world, traders earn bonuses for screwing their customers. Tucci's character is told he can lose his health care and stock options -- or keep them while sitting quietly in a room for a day at $176,476 an hour. "It didn't seem like much of a choice," he says.

Beyond the sheer entertainment value of the movie, Chandor's biggest coup is his willingness to indict a system rather than simply blame the individuals within it. Ultimately, Margin Call is the story of a Wall Street that has evolved from an economic helpmate to an economic predator.