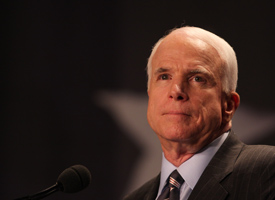 Seldom is a news story so full of question marks as today's Washington Post piece on Harry Sargeant III. Sargeant, who runs a major defense contractor, has delivered more than $50,000 in contributions to McCain's campaign. So far, so what. McCain is the third candidate to benefit from Sargeant's network of donors this election cycle -- the other two being Rudy Giuliani and Hillary Clinton -- for a grand total of more than $100,000. That, too, is not remarkable. Hotshot bundlers often deliver for multiple candidates.

But when you examine who the donors are, the question marks start popping up.

Some of the intrigue comes from Sargeant himself. His company, International Oil Trading Co. (IOTC), has contracts worth more than $1 billion with the Defense Department to supply fuel to the U.S. military in Iraq. The company, which had not done any government work before it first won that contract in 2004, signed a two-year extension worth $913 million in 2007. But there have been difficulties. The contract requires that the fuel be brought through Jordan to Iraq -- meaning only the company with a "letter of authorization" from the Jordanian government could have stood a chance. As MSNBC reported, IOTC managed that feat by striking a deal with the king of Jordan's brother-in-law. Even though other companies bid on the contract, and IOTC was not the lowest bidder, IOTC was the only one with authorization and so won the contract. (The brother-in-law is suing IOTC, claiming he was cut out of the spoils. He wants $13 million for his trouble.)

Rep. Henry Waxman (D-CA) has opened (PDF) an investigation into the contracts, in particular examining whether IOTC overcharged for the fuel. Sargeant says that the contract is "in the best interest of the military and the U.S. taxpayers."

"I have a lot of Arab business partners. I do a lot of business in the Middle East. I've got a lot of friends," Sargeant told the Post. "I ask my friends to support candidates that I think are worthy of supporting. They usually come through for me."

When the Post queried Sargeant's "friends" -- the ones whose contributions he bundled -- the paper found them not very willing to talk. Some, the paper notes, were not even registered to vote. Nor did any of them express enthusiasm for the candidate to whom they'd donated. None of them, in fact, was willing to say much to a reporter. Perhaps most bizarre of all, none had any obvious link to Sargeant or his business. Sargeant is based in Florida. The donors are in California. One manages a Rite Aid, another a hookah lounge, another is a Taco Bell supervisor. Their responses were universally evasive, for instance:

Ibrahim Marabeh, who is listed in public records as a Rite Aid manager, at first denied that he wrote any political checks. He then said he was asked by "a local person. But I would like not to talk about it anymore." Neither he nor his wife is registered to vote, but the two donated $4,600 to Clinton and $4,600 to Giuliani in December.

At the Twilight Hookah Lounge, owned by Nadia and Shawn Abdalla, patrons smoke tobacco flavored with honey and fruit from a menu that includes the strawberry-flavored Sex on the Beach and the strong, orange-flavored Fuzzy Navel.

The Abdallas, who are not registered to vote, said in an interview that they recalled writing a check to an organization in Miami, because a person with that organization was a friend of their mother's. They said they could not remember his name.

As if the story needed additional intrigue, Sargeant tells the Post that he had some help in locating donors from the former top counterterrorism official in the CIA, who consults for his firm. The Post opts not to name the official.