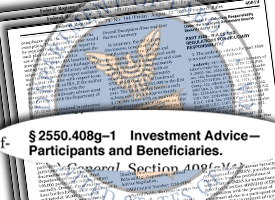 The Bush administration is rushing to pass a regulation that would relax the rules on when investment advisers can recommend products sold by their own companies, despite protests from consumer groups who say the changes could put retirement savings at risk.

ProPublica has been keeping a tally of midnight regulations pushed through the rule-making process in the final days before the new administration takes power.

The proposed regulation (PDF) (scroll all the way down to page...49,919) on investment advisers comes from the Department of Labor, and builds on changes made by the Pension Protection Act of 2006, which for the first time permitted investment advisers to have conflicts of interest in two specific circumstances.

"The theory was that people don't seem to want to pay for investment advice, so advice from even conflicted parties may be better than no advice at all," said Norman Stein, a professor at the University of Alabama School of Law and a senior consultant to the Pensions Rights Center.

The 2006 law created two avenues for advisers -- who are legally required to act in the interests of their client -- to recommend products that benefitted themselves or their company.

The first was where the adviser used a computer model, certified as fair and "independent," to generate a set of recommendations based on the client's individual characteristics, such as age and risk tolerance. The second allowed advisers to recommend products that would benefit their own company, as long as they didn't receive extra fees depending on which recommendations they gave.

Stein and other consumer advocates say the Labor Department has structured the latest proposed regulations in a way that goes well beyond what Congress authorized in the law.

For instance, while the law seemed to envisage that the computer recommendations would stand alone, the proposed regulation )(PDF) (see page 49,930) allow advisers to give additional guidance to their clients, which Stein called an "obvious loophole."

"People are given the recommendation from the computer but then they have a human telling them what to do," said Stein. "And they’re probably going to follow the entity with the body and the voice, rather than the computer."

The Labor Department said they had not thought of that interpretation of the proposed rules. Assistant Secretary of Labor Bradford Campbell said he interpreted them to mean advisers must still stick with the computer-generated advice, unless a client specifically asked for more information. He said he would look into the alternative interpretation after it was brought to his attention by ProPublica.

The Department of Labor's proposed rule also eases the restrictions under which advisers may sell their own company's products. If the rule is passed, someone working for the company could recommend a product that would result in higher fees, as long as that individual adviser doesn't get a bonus for giving the advice. Consumer groups say the exemption opens the door for abuse.

Feldman is not reassured by the department's reassurance that the auditing process will prevent those types of problems.

"Let's look at what happened on Wall Street. There were auditors. There were boards of directors. And people took risks," she said. "It seems to me that people do things even when they know they're going to get audited."

The Department of Labor says there would be severe penalties for failing to act in the best interests of the client.

"You are personally liable, which means if you are intentionally steering people the wrong way, the Labor Department can come after you and your assets," said Campbell. "In addition, we can prevent you from serving as a fiduciary in the future, which means we can cut off your means of making a living."

He said the proposal reflects a need for more affordable advice.

"We want people to be getting good advice, at reasonable prices, so they're making good decisions," he said.

The Department is still finalizing the regulation, and Campbell said he intends to "get this finished" by the end of the year.