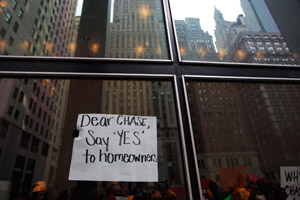 On the Saturday before Thanksgiving, Lesa Herron of Santa Rosa, Calif., opened a letter from Chase Home Finance (PDF). She'd been denied a permanent modification under the federal government's loan-mod program, Chase said, because "Your hardship is not of a permanent nature." No other reason was given.

For Herron, that was hard to understand. She was working two jobs and her mortgage payment still amounted to more than half of her income. She'd fallen two payments behind. If her money troubles were only temporary, it was news to her.

We at ProPublica reported last month that mortgage servicers are often not following the Treasury Department's rules for the program and provided three examples. One involved another homeowner who, like Herron, had been denied a modification because his hardship was not "permanent."

Since that story, we have found several other similar cases: homeowners who may well be eligible for the program but who were denied because their troubles were not deemed "permanent."

The cases ProPublica found all occurred before Treasury explicitly barred such denials in December. Despite the change in guidelines, however, those homeowners are still in limbo. Some face the possibility of foreclosure.

Through interviews with housing counselors and homeowners, we found six cases in which homeowners were denied because the hardship was found not to be "permanent." All were in November. All were denied by Chase Home Finance, JPMorgan Chase's mortgage servicing arm.

Chase seems to be alone among the largest servicers in having used that reason for denial. It's unclear just what criteria Chase used to judge a hardship temporary.

Housing counselors told us that homeowners denied a modification for that reason should reapply. The program does not allow homeowners to appeal denials, and housing advocates have often criticized the program for not providing an effective way to challenge servicers' determinations.

Christine Holevas, a spokeswoman for Chase, said that the company "adapts as quickly as possible" to Treasury's guidelines. When asked, she did not say whether Chase would review the applications of homeowners who'd been denied because their hardships were considered temporary.

As we reported last month, the largest servicers have lagged in approving homeowners for modifications. Together, those servicers account for more than 60 percent of the 3.4 million mortgages eligible for the program, but very few homeowners have been approved for lasting modifications. About 425,000 Chase customers are eligible for loan mods, according to the Treasury Department. Only a little more than 7,000 have received permanent modifications.

The Treasury Department has laid out extensive guidelines for the $75 billion program in an attempt to standardize servicers' evaluations of applicants. When a servicer joins the program, it signs a contract that says it will abide by those guidelines. In return, the servicers receive incentive payments from the government for each modified mortgage.

To receive a modification under the program, homeowners must demonstrate that they can't afford their mortgage payments. But Treasury's guidelines, first issued last April and updated repeatedly since, never mentioned testing the permanence of a homeowner's difficulties when evaluating an application. Last December, a new guideline explicitly prohibited servicers from distinguishing "between short-term and long-term hardships."

A Treasury spokeswoman said that since the program's launch, servicers had developed "varying interpretations of the guidelines" and that Chase's use of the "temporary hardship" denial before the guideline update was "reasonably consistent" with the program's rules. She said that homeowners who'd been denied for that reason can contact a hotline staffed with housing counselors for help.

It's impossible to say how many homeowners were denied for that reason. Servicers were not required to systematically collect and report the reason for denials before December. The reporting system includes only 14 possible reasons for denial; having only a temporary hardship is not one of them. Holevas did not respond to a question about the number of denials.

Jennifer Murphy, director of servicer relations at the nonprofit Center for New York City Neighborhoods, said that she had often seen homeowners rejected for modifications because their hardships were deemed "not permanent" -- both before and after the launch of the federal modification program last year. As a result, she said, she advises homeowners to state that their hardships are permanent when they apply.

ProPublica could not find an example of any of the other top three largest servicers using the same denial. Spokespeople for Wells Fargo and Citigroup's servicing arm said they do not evaluate the duration of the hardship for the purposes of the program. A spokesperson for Bank of America gave a more general reply and said the bank follows the program's guidelines when evaluating homeowners.

Homeowners must meet certain basic qualifications to be eligible for a modification under the program: the home must be the primary residence and the homeowner must be able to show she can't afford the mortgage payments. If those hurdles are cleared, the servicer is supposed to run a secret formula developed by the Treasury Department to determine whether the investor would make more money modifying the loan or not. The program lowers the mortgage payments to 31 percent of the homeowner's monthly income. If modification is likely to be more profitable, the servicer is obligated to offer the homeowner a modification.

Chase's criteria for a "hardship ... of a permanent nature," meanwhile, aren't so easily explicable. The denial seems to have been applied in a range of cases. Some homeowners had been current on their payments when they applied for a modification, some were months behind. Some had been denied even a trial modification, while some had been denied after making trial payments for over half a year. The program is supposed to feature a three-month trial period before modifications are made permanent (as we've reported, trials frequently stretch much longer).

In the example we reported on last month, Chase told a mortgage broker named Nathan Reynolds that he'd been denied a modification because Reynolds had expressed optimism that the administration's policies might rescue the housing market and thus boost his income. He told ProPublica that he'd likely declare bankruptcy if he didn't receive a modification.

Yves Andre Vital, a housing counselor with Brooklyn Housing & Family Services, told ProPublica that Chase had denied one of his clients on the rationale that unemployment was only a temporary hardship.

In Lesa Herron's case, she says a Chase employee told her she'd been denied because her gross income had not decreased since she refinanced into her loan in 2006. Herron works as an X-ray technician at a state-run center for people with developmental disabilities, but has supplemented her income by delivering pizza three nights a week for the past nine years.

Since last fall, she'd struggled to keep current on her loan, which carries a 9.5 percent interest rate and amounted to more than half of her income. But when she couldn't cover the property tax, she fell two months behind. She was accepted to the federal program last May and was able to make the trial payments, because they'd been cut almost in half, from $3,350 to about $1,778.

Herron made six of those monthly payments before she received the denial letter for a permanent modification last November. She didn't know what to do next. "I stopped paying my mortgage so that my family and I could get the money together to move when the bank made their next move." She says she might try reapplying now that she knows her denial is against the federal program's guidelines.