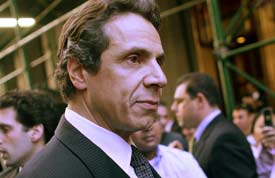 Saul M. Meyer was arrested this morning and later released on bail, said Linda Lacewell, the lead New York prosecutor on the case. Meyer owns an investment management and advisory firm called Aldus Equity, which operates in multiple states, including New York, New Mexico, Oklahoma and Louisiana. It has $6 billion under management, according to a new Securities and Exchange Commission complaint filed today.

Aldus is the only investment management firm to be criminally charged thus far. When asked whether he would bring charges against other hedge funds or private-equity firms linked to the investigation firms, Cuomo said the probe is ongoing.

"The fact that a firm has not been charged does not mean a firm will not be charged," he said.

Quadrangle did not respond to calls for comment but previously has said it is cooperating with investigators. The firm has not been accused of wrongdoing. Rattner left Quadrangle to take the Treasury Department post advising on the auto bailout.

Meyer is alleged to have paid $300,000 in bribes to the man at the center of the scandal, Hank Morris, who was a political adviser to the former New York state comptroller, Alan Hevesi. Morris helped Meyer obtain a $375 million investment from the New York pension system, Cuomo said.

Under the deal, Meyer agreed to kick back 35 percent of the fees he earned to a shell company owned by Morris, according to the Attorney General's complaint. Morris would then split that money with a third party – another placement agent not named in the complaint.

Placement agents are middlemen that help investment management firms secure business with large pension funds by assisting with meetings, marketing and other services.

Cuomo read a message that Morris allegedly asked an intermediary to relay to Meyer: "Tell that little peanut of a man I can take the business away as easily as I provided it."

Cuomo said the statement illustrates the essence of the kickbacks scheme.

Morris, who was indicted in mid March, denies the charges and said through his lawyer that he will fight them. Meyer’s lawyer said Thursday that his client did nothing wrong. "I learned years ago that it’s far easier for the prosecutor to file a complaint than to prevail at a trial," Paul Shechtman said after Meyer’s court appearance in Manhattan.

New York state and city comptrollers have decided to terminate their contracts with Aldus. The firm also received $500,000 in management fees from the New York Police Pension fund in 2008, according to that fund’s comprehensive annual financial report.

In one arrangement with the state, Aldus oversaw a bundle of investments in smaller investment funds. The bundle includes two firms listed as clients by Wetherly Capital Group, which also split fees with Morris, according to investigators.

Cuomo said there would be more developments in the investigation in coming days, including announcements from Illinois and Connecticut – states that have experienced pension fund scandals in recent years.

Correction, April 30, 2009: This post originally said that Markstone Capital Group was named in an indictment by New York Attorney General Andrew Cuomo regarding fraud in the public pension system. In fact, Markstone was not named in that indictment. Rather, the U.S. Securities and Exchange Commission sent a letter to Markstone's founder, Elliott Broidy, as part of the commission’s inquiry into public pension funds. The letter requested financial information relating to Broidy’s time as a commissioner on the Los Angeles Fire and Police Pension fund. In particular, the letter requested details of Broidy's communications with two firms named in the Cuomo indictment, Aldus Equity and placement agent DAV/Wetherly Financial. Broidy resigned from the LA pension board after the SEC's inquiry was publicly disclosed.