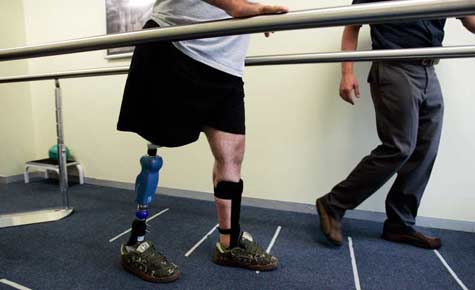 Congressional hearings generally follow a script. Lawmakers publicly vent their outrage, administration officials offer plausible defenses, and the outcome is inconclusive. But last week's airing of complaints about the government's system for taking care of civilian workers injured or killed while on the job in Iraq and Afghanistan was notable for its unanimity.

Republicans and Democrats, Obama administration officials, private insurance companies and injured contractors all agreed that there are serious flaws in the Defense Base Act, a 70-year-old law that requires federal contractors to purchase special workers' compensation insurance for employees working in war zones.

The Labor Department, which oversees the system, acknowledged that it had failed to consistently provide for the needs of the injured. Insurance carriers complained that tight deadlines and paperwork requirements were outmoded for the complexities of a war zone. Injured civilians recounted long, painful battles to get prosthetic legs, prescription eyeglasses and other basic medical needs.

"We are trying to meet a complex, 21st century challenge with a program from World War II," Seth Harris, the Labor Department's deputy secretary, told a panel of the House Committee on Oversight and Government Reform on Thursday. "It simply isn't up to the task."

Harris took issue with lawmakers who suggested that the program could be fixed by adding resources or making administrative changes.

"The program is not designed for the circumstances we're in," Harris said. "The most productive thing we can do is to work with you to fundamentally change the program."

And so the battle is turning to how, exactly, to remake the system. At the heart of the fight will be money—the billions of taxpayer dollars that now flow to AIG and a handful of other carriers that dominate the market.

The stakes are high. Tens of thousands of wounded men and women and the families of those killed depend on the system for medical care and income. And while none of the carriers rely heavily on the business from battlefield workers' compensation, the policies are notably profitable. One company, Chicago-based CNA Financial Corp., reported earning as much as a 50 percent profit on some policies. 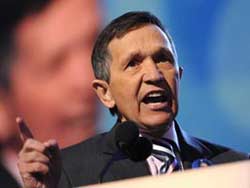 "This committee is adamant about making sure that the Department of Labor reforms its position on this matter to make sure that those who were insured receive the compensation they were entitled to," said Rep. Dennis Kucinich, D-Ohio, the chair of the Domestic Policy panel, which held the hearing.

His Republican counterpart joined in: "In a program as vast as the Defense Base Act, there are going to be failings," said Rep. Jim Jordan, the panel's ranking minority member. "We are going to correct those failings."

But with Congress focused on intractable issues like the economy, health care reform and the wars in Afghanistan and Iraq, the question is whether lawmakers will have the stamina to enact changes this year.

"We've got to make sure that we're not continuing to waste billions of dollars in taxpayer money," said Sanders, who has taken a keen interest in the issue.

At this early stage, it appears that the battle lines will resemble in miniature those of the debate over the reformation of the U.S. health care system. 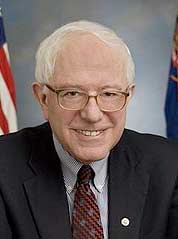 Harris outlined several suggestions in his written testimony. Though the Labor Department has not officially endorsed any plan, Harris' remarks seemed to favor some version of federalizing the program.

Under such a scenario, the government would provide insurance to war zone workers in the same way it insures federal workers: by self-insuring, rather than purchasing policies from private carriers. Such a proposal, Harris said, would save money by eliminating carriers' profit mark up. It would also reduce the potential for disputes arising from claims, since carriers would no longer worry about maximizing earnings.

The hearing was prompted after investigations by ProPublica, the Los Angeles Times and ABC News found that private carriers had routinely denied requests for medical care and disability benefits from injured workers.

Putting the program in federal hands would, of course, take money out of other hands: the private insurance industry and the brokers who sell such policies. With AIG no longer able to lobby lawmakers because of its acceptance of taxpayer bailouts, expect to see CNA and the brokers leading the charge against any effort to put the business in the hands of the government.

Three players, in particular, would be most affected. AIG holds a near monopoly, with about 85 percent of the business. CNA and Bermuda-based ACE Group are the second-largest providers, each handling about 7 percent of claims in Iraq and Afghanistan.

AIG and CNA officials both had their own recommendations at the hearing—reflecting the two firms' different business models.

Several U.S. agencies, including the State Department and the U.S. Agency for International Development, bid out insurance coverage, with the winning carrier providing a blanket policy for all agency contractors. CNA holds every such contract with the U.S. government. AIG did not even participate in the most recent bid for such work, conducted by the U.S. Army Corps of Engineers.

AIG, on the other hand, has focused on selling policies to individual firms, mostly those who contract with the Defense Department. CNA's share of that market has actually declined over the years, according to George Fay, the company's executive vice president for worldwide property and insurance claims.

Predictably, CNA urged the Obama administration to consider expanding the number of agencies that hold bidding competitions. "CNA is part of the solution, not the problems," Fay said.

AIG has focused more on making changes to the existing system. The company called for lifting deadlines that require payments to be made in 14 days and more consistent rules on the amount of such payments.

"Inconsistency has converted what should be an efficient compensation system into an unpredictable, prolonged lottery," a company statement said.

Aside from ideological debates over free market versus government, there are practical arguments on both sides. Placing the system under government control would address the issue of excessive profits earned by insurance carriers, but it remains unclear how the Labor Department would administer claims in far distant lands. AIG has offices around the world and a staff of interpreters. The Labor Department has nobody on the ground in the Philippines or Nepal.

Insurance industry officials have argued that issuing individual policies to contract companies creates an incentive for safer working conditions. The safer the workplace, the fewer accidents there are. And the fewer accidents, the lower the premiums. In the case of Defense Base Act policies, however, this incentive is diminished. Taxpayers are already billed for the premiums under contracts for, say, truck drivers or security guards. Those premiums make up a small percentage of the overall contract price.

One enormous player in the debate has yet to weigh in. The Defense Department, which pays more in premiums than any other agency, is scheduled to release recommendations for reforming the system later this summer.

Pentagon officials have so far not offered any hint of their findings. But the agency was instructed by Congress last year to examine all options, including the idea of federalizing the system.

When those recommendations arrive, the battle will begin in earnest.