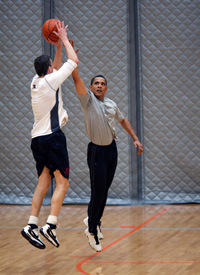 There's no summer vacation for Education Secretary Arne Duncan: $2.7 billion in federal stimulus money that Duncan had planned to dole out in October or November will instead go out to the states sooner. Plenty of students, however, will have summer vacations: The New York Times reports, "Nearly every school system in Florida has eviscerated or eliminated summer school this year, and officials are reporting sweeping cuts in states from North Carolina and Delaware to California and Washington.” While some schools are using stimulus money to maintain their summer programs, many districts are struggling with budgets the stimulus can’t close. This follows reports of brewing tensions between states and school districts on how to spend stimulus money.

It'll be interesting to see if the administration fast-tracks any more stimulus cash. Critics of the stimulus -- and increasingly the public -- have questioned the slower-than-expected pace of spending. That might be why the Obama administration is embarking on a "Listening Tour" of rural areas this summer -- especially, as the Los Angeles Times reports, in swing districts.

On Wednesday, we pointed out a handful of articles reporting that stimulus funding was helping states avoid “doomsday” scenarios with their budgets. Gov. Jim Doyle told the La Crosse Tribune that Wisconsin's budget cuts are the largest since the Depression but that overall spending is up 6 percent. "This is a 6 percent increase as a result of the federal stimulus money,” he said. “We're spending less Wisconsin taxpayer money than we did last time." True enough, but the $787 billion dollars of taxpayer money being spent to stimulate the economy includes some dollars from Wisconsin residents.

Vice President Joe Biden was back on the road yesterday, traveling to rural Pennsylvania where he touted the $7.2 billion stimulus broadband program. Just think -- this way everyone can quickly access video clips of Biden's gaffes no matter where they live! Not so fast ... the broadband program will extend service to underserved areas but it will not be comprehensive. Plus, according to stimulus rules, the minimum download speed that qualifies as broadband is 768 kilobits per second, which is slow by cutting-edge standards.

The deadline for states to submit applications for their piece of $48 billion in state fiscal stabilization funds was Wednesday. Most of that money (81.8 percent) is earmarked for public schools, and the rest can be used flexibly to avoid cuts to public services like police and fire. All states met the deadline despite lingering budget issues that had some states getting their applications in just under the wire. Texas was the last one in: Its application reached the Education Department with just 18 minutes to spare. For more “deadline” news, check out Wednesday’s story about highway spending.

More stimulus magic? You be the judge. Hydrogen Energy International received $308 million for a plant through the Clean Coal Power Initiative. Minnesota Public Radio reported Wednesday that Basin Electric Power Cooperative, a North Dakota company, will receive $100 million in stimulus funds to "capture carbon dioxide emissions." Energy Secretary Steven Chu, who traveled to Bismarck, N.D., for the announcement, told listeners: "Once you send a clear signal to the industry, and both the Republicans and Democrats get behind this, something magical happens. As soon as both parties get behind this, the lobbyists have nowhere to go and they assign it to the engineers, and the engineers solve it." The Bismarck Tribune has more.

Got something for our roundup? Send it to amanda AT propublica.org.