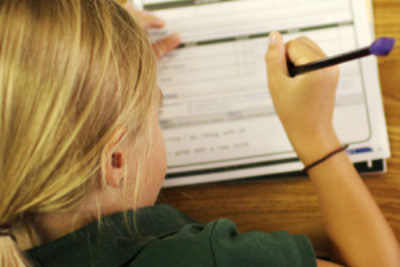 Update, Nov. 13: North Carolina regulators have removed Charter Day School, Inc., a chain of four charter schools operated by businessman Baker Mitchell’s for-profit management company, from “financial probationary status” now that the organization has complied with a state order to disclose the salaries of administrators, the StarNews of Wilmington reports.

The North Carolina State Board of Education has issued a warning to a charter-school chain for failing to comply with an agency order to disclose the salaries of school administrators. The schools have been put on "financial probationary status," which could lead to sanctions if their board does not comply within 10 business days.

This is the same charter-school chain, Charter Day School, Inc., that ProPublica wrote about last month. As we reported, the four charter schools channel millions in public education dollars each year to for-profit companies owned by the schools' founder, businessman Baker Mitchell. One of the for-profit companies, Roger Bacon Academy, is paid to run all the day-to-day operations of the schools. As we wrote:

It handles most of the bookkeeping. The treasurer of the nonprofit that controls the four schools is also t he chief financial officer of Mitchell's management company. The two organizations even share a bank account.

Mitchell's management company was chosen by the schools' nonprofit board, which Mitchell was on at the time — an arrangement that is illegal in many other states.

Charter schools, which are privately run but government-funded, often outsource back-office functions to private companies. At issue between North Carolina and Mitchell's charter-school chain is the extent to which regulators can demand to know what happens to public dollars once they move into the coffers of a private company.

State officials say they have the right to ask for information related to the schools' activities and programs – and that includes salaries of any employees assigned to work at them. Other charter schools in North Carolina have complied and turned over this information. Mitchell's schools are the only ones that have not.

In a letter sent by the management company to Ferrante, Mitchell's company said it would turn over the salary information so long as regulators sign an agreement to recognize the information as confidential and exempt it from public disclosure.

Through Ferrante, Mitchell declined to comment on regulators' latest demand for salary information.

On his blog and in earlier interviews with ProPublica, Baker Mitchell has maintained that private companies operating charter schools should not have to be transparent about their financials or publicly disclose what they pay their employees.