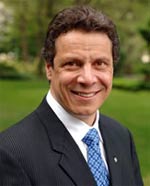 There's been ample criticism -- by Congress and the presidential candidates in particular -- of executives of failing companies and their golden parachutes. New York Attorney General Andrew Cuomo has taken it one step further: in a letter today, he warned AIG's Board of Directors that if the company didn't recover its recent "unwarranted and outrageous expenditures," his office would take legal action.

In his two-page letter (PDF), Cuomo singles out a few of those expenditures. They include both payments to outgoing executives and "luxurious retreats for its executives" even after the $85 billion taxpayer-funded bailout. AIG should not only recoup those payments, but also make sure that "new protections" are in place to prevent any similar ones in the future, Cuomo writes. The recent executive retreats include an "overseas hunting party and a golf outing."

Among others, Cuomo singles out an unnamed "top-ranking executive who was largely responsible for AIG's collapse" who received $34 million in bonuses and a $1 million a month consulting gig when he resigned in February. That exec is Joseph Cassano, and as we reported last week, he did little actual consulting for the past several months. The payments continued even after the bailout, only halting one day before last week's congressional hearing.

AIG's statement in response to Cuomo's letter said that the company would "fully cooperate" with the attorney general, adding that the company had issued a "clear directive" last week "ending all activities that are not essential to the conduct of our business."

Note: One thing AIG won't be ceasing any time soon is its extensive lobbying operation, as we reported last week.