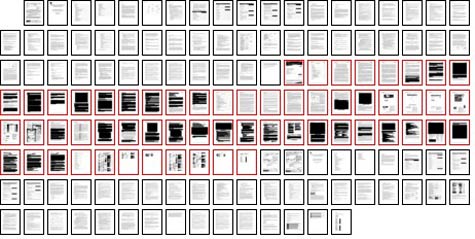 The Obama administration has refused, once and for all,to reveal the full details of its contract with Smartronix for a new version of Recovery.gov, the government’s stimulus information clearinghouse, as well as a sophisticated “data warehouse," which typically allows users to store and analyze large amounts of data.

In July, the administration agreed to pay Smartronix, a Maryland-based company, up to $18 million to create what it called Recovery.gov 2.0. The seemingly rich contract got wideattention.

However, when ProPublica filed a Freedom of Information Act request to get a copy of the contract, the General Services Administration responded, a month later, by releasing a heavily redacted version. (Take a look.) Nearly half the pages in the contract’s technical proposal, which is the main body of the document, were redacted completely, and of the remaining pages, many had half or more of their content blacked out.

We appealed the GSA’s decision, noting the administration’s commitment to transparency in general, and its promises of transparency in the stimulus in particular. We also wondered whether the arguments used to defend the redactions — especially the prohibition against the release of proprietary information — appropriately covered the sweeping redactions.

On Monday, nearly eight weeks after we sent our appeal, the GSA responded, denying our appeal, citing the same arguments against the release of "proprietary or trade secret information."

The Federal Program to Rebuild After Hurricane Katrina Shortchanged the Poor. New Data Proves It.