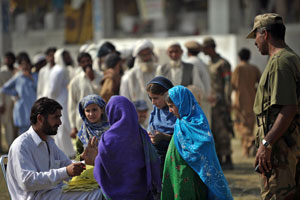 The Obama administration has reversed plans to redirect more than $200 million in aid money for Pakistan away from American contractors and nongovernmental organizations, documents obtained by ProPublica suggest. The move signals that the administration's broader plan for Pakistani assistance, which calls for relying more heavily on local organizations to run the growing U.S. aid programs there, may be harder to achieve than officials had first hoped.

Sepideh Keyvanshad, a senior official for the U.S. Agency for International Development, told ProPublica that the State Department and USAID are still moving toward channeling this money and other aid through Pakistani organizations. But she added that the administration had to remain flexible as it decides how quickly it can make that change.

"Our end goal is still the same," said Keyvanshad, the senior development adviser to Richard Holbrooke, the administration's special representative for Afghanistan and Pakistan. "What might be shifting a little bit is the timeline of going through this process."

Last month, we reported that the administration planned to shift Pakistani aid money to local NGOs, contractors and government ministries in order to strengthen those organizations. That plan will determine the spending of $7.5 billion in civilian aid in Pakistan over the next five years, and it spurred warnings from some development experts, who cautioned that it would take a long time before Pakistani groups were ready to handle such a large influx of new dollars effectively.

At first, the administration seemed ready to take that chance. On Dec. 7, USAID's Pakistan office sent a letter (PDF) to U.S. contractors and NGOs running programs in the agency's Pakistani Economic Growth portfolio, a collection of seven programs worth a total of $237 million. (An eighth project, run by the QED Group and designed to monitor the impact of U.S.-funded aid projects, was canceled in the fall.) The letter said USAID was "curtailing current activities that are longer-term and are not targeting local level capacity building." It instructed them to refocus their projects for "quick impact (within a 3 to 6 month horizon)," and in a way that "can be replicated by local implementers."

"Plans must recognize that a transition to local organizations is imminent for most activities," the letter added.

The State Department formalized that policy shift a week later, when it sent a report (PDF) to Congress saying the administration planned "a decrease in reliance on U.S.-based partners for education, health and other field programs that can be managed responsibly by Pakistani institutions." The report made an exception for "large infrastructure programs," which it said would require a short-term increase in specialized U.S. experts in fields like architecture and engineering.

But just five days after the report to Congress, USAID sent those same contractors and NGOs a second letter (PDF), which began: "This letter replaces the letter dated December 7, 2009." It said that none of the programs in the Economic Growth portfolio were being terminated and encouraged them "to proceed with the hiring of permanent personnel." No reason was given for the apparent reversal.

The Dec. 19 letter isn't the first sign of the challenges facing USAID as it seeks to work more closely with Pakistani organizations. Earlier this month, we reported that the agency has asked for help training Pakistani NGOs and other local organizations, which a USAID official wrote "do not meet the minimum standards for managing" U.S. government funds. But the letter is an indication that those challenges are delaying the implementation of the administration's strategy.

Chemonics and CARE International, two development organizations that are set to receive almost three-quarters of the funds under the Economic Growth portfolio, declined to respond to questions about the policy shift, including whether they had asked the administration to reconsider its original timeline. A spokeswoman for Chemonics, Lisa Gihring, cited USAID's request that media questions be referred to the agency's headquarters in Washington. Nolu Crockett-Ntonga, a spokeswoman for CARE, said that the organization was unable to respond because of staff shortages following the earthquake in Haiti.

Margy Hannon, a USAID spokeswoman in Pakistan, confirmed that none of the current programs in the Economic Growth portfolio had been canceled. But she declined to comment on what caused USAID to shift away from the policy laid out in the earlier letter.

Do you work in the development field in Pakistan? We'd like to hear from you. You can email us at [email protected].