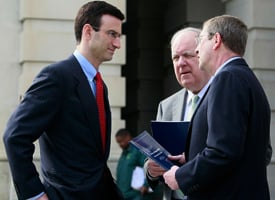 Nothing much is clear about the Treasury Department's new program to shore up the financial system. All we know is that regulators have begun their "stress tests" to determine how many more billions the banks will need, but those tests won't be finished until as late as the end of April.

The Obama administration's proposed budget today (pdf) provides at least the clarity of an actual number: $750 billion. That's how much it cites as a guesstimate of the funds needed "for further efforts to stabilize the financial system." (See the full excerpt below.) The government should get about two-thirds of that investment back, today's blueprint says, meaning that the real cost would only be about $250 billion. It seems we've finally and completely departed from former Treasury Secretary Hank Paulson's notion that the bank investments wouldn't cost the taxpayers anything.

If the administration were to go to Congress and ask for $750 billion more, that would bring the bailout total to $1.45 trillion, but we're not there yet. The administration isn't asking for anything today, presumably waiting for its stress tests to run their course before arriving at the final price tag.

The Nation has inherited deep problems in its financial system. Additional action is likely to be necessary to stabilize the financial system and thereby facilitate economic growth. Although the Administration is not requesting additional funds from the Congress at this point and although it is not yet possible to provide a precise estimate of how much additional Federal action may be involved should the Administration need to request such funds, the President’s Budget nonetheless includes a $250 billion contingent reserve for further efforts to stabilize the financial system. The approach for this financial stabilization reserve is similar in spirit to the one adopted with regard to future war costs; the Budget includes a placeholder for future war costs even though such costs if any are difficult to predict. Estimates of the value of the financial assets acquired by the Federal Government to date suggest that the Government will get back approximately two-thirds of the money spent purchasing such assets—so the net cost to the Government is roughly 33 cents on the dollar. These transactions are typically reflected in the budget at this net cost, since that budgetary approach best reflects their impact on the Government’s underlying fiscal position. The figure recorded in this Budget as a placeholder similarly reflects this net cost concept. The $250 billion reserve would support $750 billion in asset purchases.

The existence of this reserve in the Budget does not represent a specific request, rather as events warrant, the Administration will work with the Congress to determine the appropriate size and shape of such efforts, and as more information becomes available the Administration will define an estimate of potential costs. In addition, should a request become necessary, the Administration is committed to working with the Congress so that to the maximum extent possible, taxpayers are paid back over time for any additional emergency assistance provided to the financial system. The compensation to taxpayers could include requiring dividend payments, warrants, equity and other forms of upside opportunities from those firms receiving assistance. The compensation could also include a fee or assessment on financial institutions or financial activity, which would have to commence only when the financial system had stabilized and which would be designed to minimize adverse effects on the long-term recovery of our financial system.