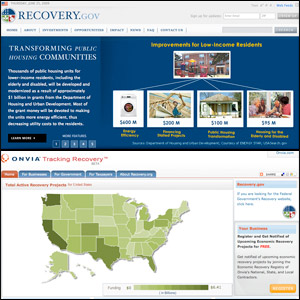 If you're living in Oklahoma and need to report waste or fraud, call (877) 259-7337, a toll free hotline set up by the U.S. attorney there that will be answered by none other than FBI agents. The new phone line is the latest effort set up by the state to monitor stimulus abuse. You can also let us know here at ProPublica ... Meanwhile, do you know if your state has set up a stimulus-hotline? Curious minds want to know.


All states have already met the June 30 deadline to obligate fifty percent of their allotted transportation stimulus funds, says Vice President Biden. The remaining fifty percent of funds must be obligated by March 2, 2010. This June 30 deadline only tells us that funds have been obligated. When projects start and how how many people they employ are the critical factors determining the stimulus' success.

Did you ever mistake Recovery.org for Recovery.gov? With its pie charts and graphs tracking the federal government's procurement activities, it's easy to assume the commercial site, run by a company named Onvia, is the real deal. That may just be part of Onvia's business plan. In the least, you'd think that Onvia's site raises expectations for Recovery.gov. GreenBiz has an interview with Onvia's CIO.

Nebraska's Journal-Star reports massive delays for the state's stimulus-funded construction projects, estimating that most won't start until 2010. Why? Evidently the state needed to add new regulations after "a federal audit in October 2007 indicated weaknesses with the local monitoring of federally funded projects." Also, many projects require the state to document potential environmental impacts, which will also take time. Is Nebraska an outlier? That's what I'd like to know.

Montana Gov. Brian Schweitzer announced that the state's Department of Transportation site will be adding a slew of features to document stimulus spending and progress -- even live Web cams on big construction projects. The Governor said the site is in response to pressure from constituents who "say government needs to be more transparent, more accountable."