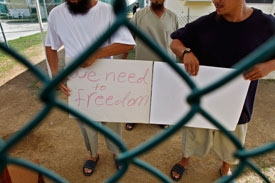 The Supreme Court agreed today to hear an appeal by Uighur detainees held at Guantanamo on whether those detainees can be released into the United States.

TheNew York Times’ Adam Liptak summarizes the story so far: the detainees, members of China’s Muslim minority who were captured in Pakistan in 2001, were ordered released by a federal judge last October. In February an appeals court reversed the ruling, “saying that judges do not have the power to override immigration laws and force the executive branch to release foreigners into the Unites States.”

The Uighers pose a challenge to the Obama administration’s pledge of closing Guantanamo by January, which the administration has already begun to back away from. Though a judge has ordered their release, they fear going back to China, where, as Liptak writes, they’re viewed as terrorists. The White House has been looking for other countries to take them; so far, four of the 17 men have been transferred to Bermuda, and the Pacific island nation of Palau has offered to accept the rest. If the remaining Uighur detainees are resettled, writes Liptak, the case “may turn out to be moot.”

You can use our handy interactive chart to track the cases of each of the 38 Guantanamo detainees whose habeas corpus cases have been heard by a U.S. judge. In July, ProPublica’s Chisun Lee explained in The New York Times how federal judges are “functioning, in essence, as the country’s national security court.” You can also read more of our ongoing coverage of this issue on our Detention Dilemma page.