Editor's Note: This is one in a series of posts from the ProPublica Reporting Network, our citizen journalism initiative. The Reporting Network is currently tracking stimulus projects on the ground. 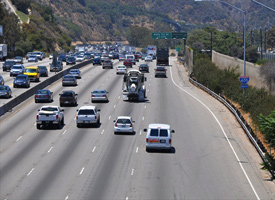 Paul Chavez, the news editor of Clear365 and a former general assignment reporter in the Associated Press' Los Angeles bureau, and Albert Kaplan, a retired executive from the technology sector, are tracking Interstate 405 as part of our Adopt a Stimulus Project initiative.

The Southern California bypass is one of the nation's largest and most congested freeways. It is also the largest highway project in the nation to receive stimulus money, according to Gov. Schwarzenegger in this video from the project's ground-breaking ceremony.

From start to finish construction will cost more than $1 billion, including $189.9 million from the American Recovery and Reinvestment Act. The money will be used to widen I-405 to include carpool lanes along 10 miles northbound in West Los Angeles. For those of you out in LA, construction on I-405 runs from I-10 -- the Santa Monica Freeway -- to the Ventura Freeway (101), which passes exits to Santa Monica Boulevard, UCLA and the Getty Center.

Now, we are naturally very interested in the largest highway construction project in the country. Chavez and Kaplan's quick study of I-405 has already turned up unexpected insight into the American Recovery and Reinvestment Act.

For one thing, California is using its own formula to predict the number of jobs the project expects to create, rather than the one recommended by the president's Council of Economic Advisers.

Below is what we know now. With the help of Chavez and Kaplan we will continue to update you on this enormous project.

START DATE: On May 8, 2009, Gov. Schwarzenegger announced what he called the "groundbreaking" of I-405. Chavez followed up with Judy Gish, a spokeswoman for Caltrans District 7, who told him that the project is in its "survey phase." (In Chavez' photo above you can see survey equipment, too.) Construction will begin later this fall, according to the Los Angeles Metropolitan Transportation Authority. 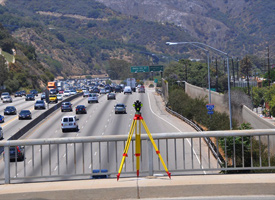 JOBS CREATED/SAVED: At the groundbreaking ceremony, Gov. Schwarzenegger said that I-405 would create 18,000 jobs because "every billion dollars creates 18,000 new jobs." Schwarzenegger's prediction for job creation relies on a multiplier developed by the Sacramento Regional Research Institute (SRRI) in 2004. The report was commissioned by the California Infrastructure Coalition, the California Business Roundtable and other coalition partners. California has relied on this multiplier since 2005, when Schwarzenegger campaigned for a transportation bond, said Caltrans spokesman Mark Desio.

Multipliers relate two numbers, showing, for example, "what a dollar in tax cuts amounts to in terms of economic growth," as my colleague Olga Pierce explained in February. The California Infrastructure Coalition used a multiplier of 1.76 and predicted that $1 billion spent on transportation would result in 10,165 direct jobs, 2,628 indirect jobs and 5,073 induced jobs (PDF of the California Infrastructure Coalition report).

The coalition's multiplier predicts 6,866 more jobs than the multiplier developed by the Council of Economic Advisers does. According to the council, for every $1 billion spent, 11,000 direct and indirect jobs are produced. Put another way, every $92,000 results in a direct or indirect job. The council, unlike the California Infrastructure Coalition, does not count induced jobs -- jobs produced by, for example, an increased demand for certain goods and services by the newly employed. If California's multiplier did not take induced jobs into account, its prediction would be only 1,793 more jobs than the council's estimate, not 6,866 more.

In May 2009, the Executive Office of the Council of Economic Advisers distributed a 16-page guidance telling agencies to use the $92,000 multiplier (PDF). But it appears that the agencies are only encouraged to use it, not required.

"The agencies in the past have used their own models," explained Sasha Johnson, a spokeswoman for the Department of Transportation.

The council's multiplier has been hotly contested and debated. Earlier this year, the council predicted that the stimulus would create 3.5 million jobs nationwide, a prediction the vice president later described as "overly optimistic." Both the council's and the California coalition's multipliers, however different they are, are grounded in macroeconomics. They rely almost exclusively on macroeconomic indicators to predict growth, which renders them -- as Pierce put it -- both useful and problematic. "Accuracy is measured in the millions of jobs -- a margin of error more fitting to astrology than science." For more information on the multiplier's limits, please read Pierce's "Is the Stimulus Stimulating Jobs?"

For the time being, California will continue to use its own multiplier. "It's not that what the U.S. DOT is saying is incorrect," said Desio. "We're just sticking with what we've used since 2005."

Johnson said the White House recently issued separate guidance on how to report about jobs created or saved, a mandate that takes effect in October under language in the stimulus bill. States must report directly to the Office of Management and Budget every quarter.

For those reports, the OMB formula is simple: For each stimulus-funded employee, divide the number of hours worked by the number of hours in a full-time schedule. So someone who works full-time for four months would count as one-third of a job. (See Page 33 of OMB memo for more details (PDF).)

"For any other reporting or methodology, the states are on their own, and we don't endorse it," said Johnson.

Chavez and Kaplan will check in with their respective state DOTs and with companies awarded contracts to find out exactly how many jobs are created on a project-by-project basis. In the meantime, we're following up with the California DOT and Kiewit Pacific, the company awarded the I-405 job, to find out exactly how many people are employed by this project. Stay tuned.

COST: $739,014,000 is the base cost of widening I-405. Additional costs -- which include right-of-way enhancements and project support -- bring the project's full cost to more than $1 billion. The stimulus covers only $189.9 million of the full project cost. California, Kaplan told me, is now planning on a supplementary bond offering in the range of $900 million to fully fund I-405's expansion.

A former AP reporter and a financial executive are on I-405's case -- a formidable pair. Stay tuned for their next update on the nation's largest highway project.