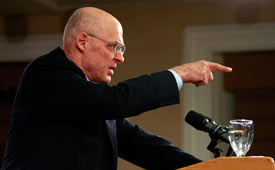 Treasury Secretary Hank Paulson is "debating" returning to Congress to ask for a second helping of bailout money, reports the Wall Street Journal. If he were to take the plunge, he’d have to submit a report detailing how the second $350 billion installment of the $700 billion bailout would be spent. Congress could then vote to approve or deny the additional funds.

The big ask would come next week, if Paulson decided to ask at all, the Journal reports. (It's not clear from the piece what the Journal's source is for Paulson's thoughts. No Treasury official is cited either on the record or on background.)

If indeed Paulson does go again to Congress with hat in hand, the trip likely wouldn’t be a pleasant one. He’d likely be grilled on Treasury’s rapidly shifting strategy for the bailout, an inconsistency that would cast doubt that Treasury would stick to its plan for the extra billions. And he’d have to explain why the Treasury doesn’t like the idea of tracking how financial institutions are using the bailout money. Our latest bailout tally puts the Treasury’s commitment so far at $242.69 billion to 132 financial institutions.

But Paulson’s hand "may ultimately be forced if market conditions continue to deteriorate," the Journal reports.

The odds right now, however, are looking long that Paulson’s trip would be a successful one. From the Journal:

"Paulson is a big part of the problem because they don't have a coherent plan," said Rep. Virginia Foxx (R., N.C.).

Rep. Foxx is one of a number of lawmakers who have laid the groundwork to block access to the second half of the bailout funds. Last month, Rep. Foxx and 15 House colleagues introduced a resolution that would be considered if Treasury does make a request...

Congress can deny the funds by passing a resolution like the one already introduced, disapproving of Treasury's plan within 15 days. If Congress doesn't act, the funds are released.

House Minority Leader John Boehner (R., Ohio) has told Mr. Paulson that there aren't enough votes in favor of releasing the funds, according to people familiar with the matter. Critics in the Senate, where anger is also running high, are also moving to block a potential Treasury request.