An independent review of the Orlando Fire Department’s response to the 2016 Pulse nightclub shooting has concluded that the agency was not prepared for the disaster and did not know how to use the ballistic vests it had previously purchased.

The report by the National Police Foundation, released Wednesday, largely corroborates a September investigation by WMFE and ProPublica that found that the Orlando Fire Department failed to prepare adequately for a mass shooting, despite calls from some supervisors to do so. Forty-nine people died and more than 50 were injured during the shooting. The foundation is a nonpartisan police research organization.

The foundation’s report concluded that Fire Department personnel working the night of the Pulse shooting operated with bravery and that their actions saved lives. But, it noted, “operations were challenged by the extended or delayed arrival of executive leadership on scene,” which didn’t arrive until after the shooter was killed, “the lack of inter-agency communication, and outdated policies.”

ProPublica and WMFE have previously reported how Orlando Fire Chief Roderick Williams did not respond to a page during the night of the shooting (he said he did not receive it) and how the scene was managed by a midlevel supervisor. Moreover, the ProPublica and WMFE investigation reported that the Fire Department command center was separate from the one used by the Police Department and other law enforcement agencies. The new report concludes this violated multiple Orlando Fire Department and city policies.

The foundation’s report also confirmed our findings that bulletproof vests for firefighters went unused the night of the Pulse attack, despite years of attempts to create a policy on how paramedics, guarded by police, could enter a dangerous situation to triage and treat shooting victims. This team approach is called a rescue task force.

Frank Straub, the lead author of the report, said the Orlando Fire Department saved a lot of lives during and after the Pulse shooting. But the event provides a cautionary tale of stagnant policies at a time of increasing threats, he added.

Several of the Fire Department’s policies were written in 2001 and hadn’t been updated since.

In a press release issued Wednesday, the city of Orlando said it has updated its active shooter policies since the Pulse nightclub shooting and now has bulletproof vests for all first responders. The city paid for the foundation to review its response. 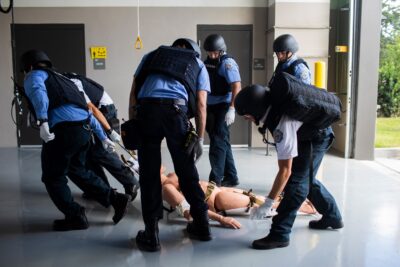 The Fire Department conducted training drills for years, but its policy never matched its training. The project to write and implement the policy was shuffled from administrator to administrator after Williams was sworn in as fire chief in 2015, and it was not completed by the time of the shooting.

Wednesday’s report stopped short of saying the Fire Department should have gone into Pulse, saying those on the scene followed existing protocols.

“The leading factor that contributed to this outcome is the fact that the operating environment inside Pulse remained a ‘hot zone’ because of the threat posed by the suspect and the alleged presence of improvised explosive devices,” the report said.

The idea that the inside of Pulse was too dangerous for the Fire Department is at odds with the National Police Foundation’s own report in 2017 evaluating the Orlando Police Department. In that report, the foundation concluded that after 20 minutes, “it would have been reasonable for fire or EMS to enter with a law enforcement cover to assist,” and computer-aided dispatch reports show the Police Department had asked the Fire Department to come inside the club. (That report was funded by the U.S. Justice Department’s Office of Community Oriented Policing Services.)

In an interview, Straub, the lead author of both reports, said there was a window when a rescue task force could have gone in — if there was a policy and equipment in place.

“I don’t know if we will ever know definitively if” a rescue task force “would have changed the outcome for victims,” he said.

An independent study of Pulse nightclub autopsies published this year concluded that 16 victims could have survived had they gotten medical care sooner.

“More people could have been saved if we had done what we told [the Orlando Police Department] we’d do,” Saez said. He was referencing joint training drills between the Orlando Police and Fire departments in the years years before Pulse.

The National Police Foundation also criticized the Fire Department for not writing its own after action review immediately after the event, an industrywide best practice, and for not doing enough to address the mental health of first responders. WMFE and ProPublica have profiled several first responders dealing with post-traumatic stress disorder related to the shooting.

Fire Department personnel who responded to the scene didn’t get one-on-one counseling before being sent home, and many had to respond to other calls for service after the shooting. The department did not follow its own guidelines for having a critical incident stress management team in place, and many firefighters said one of those teams hadn’t been used in “decades,” despite the policy.