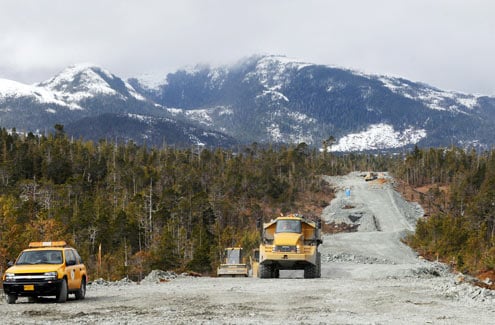 When Lois Epstein approached Gov. Sarah Palin during a July 2007 meeting, she says she had a simple request: pull the plug on the construction of a $26 million dead-end gravel road that she saw as a waste of federal money. The road was part of the $398 million project to link Ketchikan and its airport on Gravina Island known as the "Bridge to Nowhere," and an earmark inserted by Alaska's congressional delegation had provided the funding. But construction had begun in June, and it didn't seem to matter that the infamous bridge -- to which the road would have led -- would never be built. Every dollar spent on the project was a dollar wasted, Epstein thought.

Epstein, director of the nonpartisan Alaska Transportation Priorities Project, told ProPublica she handed Palin an editorial that had run the prior month in the Anchorage Daily News. The editorial, by Heritage Foundation fellow Ronald Utt, called the road a "wasteful" project with "little to no measurable benefit." It urged Palin to be "responsible and ethical" and "return the money to Washington" so it could be redirected to hurricane-ravaged Louisiana and Mississippi. Utt's piece reflected the consensus in Washington, D.C., and Alaska that no more money would be earmarked for the bridge project, which had become a symbol of pork-barrel spending.

"I gave her the Heritage Foundation piece and said this is not a good project and she should think about reappropriating the money," Epstein told ProPublica. Palin replied that her administration was "very close" on making a decision, Epstein said. Two months later, Palin announced the state would no longer pursue the $398 million design. The statement made no mention of the 3.2 mile access road to an empty beach, which by then was well underway.

Since her nomination as the Republican vice presidential candidate, Gov. Palin has stressed her reform credentials, singling out her handling of the "Bridge to Nowhere" as evidence. "As governor, I've championed earmark reform to stop Congress from wasting public money on things that don't necessarily serve the public interest," she said last week.

But a gravel road on an Alaskan island with 50 inhabitants doesn't serve the public interest, critics say. "This project isn't satisfying any specific transportation purpose or any public need," said Keith Ashdown of Taxpayers for Common Sense.

As ProPublica reported last week, Palin's administration is still planning to link Ketchikan (pop. 7,400) to its airport with the help of as much as $73 million in federal funds earmarked by Congress for the original "Bridge to Nowhere" project.

Palin declared in her acceptance speech she had told Congress, "'Thanks, but no thanks' to that Bridge to Nowhere," adding that if Alaska were to build such a project, the state would do so "ourselves." The campaign did not respond directly when asked by ProPublica whether Palin knew Alaska was stilling planning to use federal money to connect Ketchikan and Gravina Island.

Today, the McCain campaign issued a statement to ProPublica acknowledging that the project was ongoing and emphasizing that Palin had rejected the most expensive design for the bridge. The statement, however, did not address why Palin had not stopped construction of the $26 million road, which is called the Gravina Island Highway.

"Governor Palin opposed a wasteful, unwise, and irresponsible funding plan that was not the best means for fulfilling the local community's needs," said Maria Comella in an e-mailed statement. "Governor Palin understood that a more cost efficient, sensible solution could still be implemented to satisfy the economic and infrastructural demands of the community. The Department of Transportation is currently evaluating alternative plans to meet these same demands."

Alaska's Department of Transportation is currently analyzing nine different alternatives (six bridges and three ferries), only one of which connects with the recently completed Gravina Island Highway. The only other proposed solution that would use a substantial portion of the road is a bridge with a price tag of about $254 million, said Malcolm Menzies, an Alaska DOT official. The alternatives range from a low cost estimate of $80 million for one of the ferry proposals to about $360 million, Menzies said. CLICK HERE for a map of the access road, the original "Bridge to Nowhere" design and the alternatives being considered by the DOT.

Ketchikan Mayor Bob Weinstein, a Democrat, faults the Palin administration for building the road, which he said some have taken to calling the "road to nowhere." But it would be an excellent site for a footrace, he said. "It's a nice flat road. It'll be perfect for a 10K race. You could be confident there wouldn't be any traffic." Construction is expected to be completed this week.

What became the notorious "Bridge to Nowhere" had its roots in plans to shorten the trip to the airport for tourists and residents of Ketchikan (population 7,400). In 2005, Alaska's congressional delegation won $223 million in earmarks for the bridge, which was expected to ultimately cost $398 million.

A campaign led by Sen. Tom Coburn (R-Okla.) to redirect the funds to a New Orleans bridge damaged by Hurricane Katrina failed. But Congress amended the legislation allowing most of the money to be used for any transportation project in Alaska.

For reasons that remain unclear, the bill left intact language requiring that $48 million be spent on "earthwork and roadway construction" for the Gravina Access Project.

According to Menzies, the Alaska DOT official, that meant the money could only be used to build projects directly associated with the $398 million bridge. The only alternative, Menzies said, was to return the money.

"I don't think there was any discussion about that," he said.

Such an attitude is typical of state DOTs, said Ashdown. They'll "move heaven and earth to make sure they can spend every dime given to them from the federal government through earmarks."

Menzies, however, argued that the road was not a waste. Even if it led to an empty beach, the road would help open the sparsely populated Gravina Island to development. And when it came to Alaska, "'nowhere' is a relative term," he said. "All of our roads to nowhere because they end in wilderness. That's just the way of Alaska."

Palin could have canceled the contract upon taking office. The governor has that power, said Roger Wetherell, spokesman for Alaska's DOT, and Federal Highway Administration spokesman Doug Hecox said that he could think of "a number of examples" of states canceling projects begun by a previous governor's administration.

Moreover, the fact that the funds had been earmarked for that purpose doesn't mean that the state is forced to use them, Hecox said. The state could opt not to use the money, and Congress has the power to send it to other federal needs.

Alaska has so far used a total of about $41 million in federal funds for the road and related projects, Hecox said.

Update: Earlier this month, ThinkProgress posted video of Gov. Palin at a 2006 debate supporting construction of the road. "I'm not going to stand in the way of progress,â" she said in response to question about whether she'd cancel construction of the road. Opponent Andrew Halcro (I), however, said he would stop construction: "this isnât progress. This is a road to a bridge that will never be built." Hereâs the video: