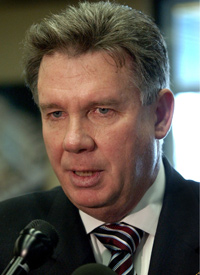 LOS ANGELES -- Two pension trustees under scrutiny by the U.S. Securities and Exchange Commission in a scandal involving alleged kickbacks at retirement systems resigned Thursday from a Los Angeles pension fund, saying their tenure had become a distraction.

The Securities and Exchange Commission, in what it termed an "informal inquiry," sent both Harrigan and Broidy a letter last month seeking details of his relationships with consultants to the $11 billion city pension system. Neither man has been accused of wrongdoing.

The resignations are the latest collateral shocks from parallel pension investigations by the SEC and New York Attorney General Andrew Cuomo, who last week issued subpoenas to more than 100 investment management firms and the placement agents that help them get pension business.

The SEC last week charged Aldus Equity and its managing partner, Saul Meyer, with paying kickbacks to manage money in New York state's $122 billion pension system. Aldus and Meyer have said they did nothing wrong. Nonethless, several public pension systems have terminated Aldus Equity, and the Los Angeles board followed suit at a Thursday meeting.

Wetherly Capital, of Los Angeles, and Pacific Corporate Group, of San Diego, have not been charged and have said they are cooperating with investigators.

Harrigan previously served as president of the California Public Employees’ Retirement System and used his position at the Union of Food and Commercial Workers to raise money for Democrats. Broidy founded Markstone Capital Group, an $800 million private equity firm that invests in Israel. Broidy was finance chairman for the Republican National Committee in 2008 and was named in 2006 to the U.S. Department of Homeland Security Advisory Council.

Morris, who was a political adviser to former New York Comptroller Alan Hevesi, has denied wrongdoing. Hevesi oversaw New York’s pension fund as comptroller and has not been charged.

Harrigan’s resignation surprised fellow trustees at Thursday’s board meeting, which Broidy did not attend. The pension scandal has "created a frenzy of media activity," Harrigan said, reading from a prepared statement. "The local media has placed me at the eye of this storm."

Earlier, he joined other trustees in voting unanimously to fire Aldus Equity, which the fund was paying $1 million a year to oversee $87.7 million of the system’s $609 million in private equity investments. Board members had been given information detailing accusations against Aldus arising from activities in New York.

"If we don't approve this motion, it's going to give the impression that we condone pay-to-play," said board member Sam Diannitto.

On April 30, staff at the Los Angeles pension fund warned that a representative of Aldus was meeting or trying to meet with board members to discuss the SEC and New York attorney general investigations, according to an e-mail obtained by ProPublica. The staff said such a meeting would violate city ethics rules.

Harrigan took offense to the warning, according to a reply e-mail on May 1. "These threatening communications are extremely disturbing," he wrote.

Harrigan retired in 2006 as international vice president of the UFCW. In 2000, he coordinated the UFCW's efforts in the presidential election. He left CalPERS, the biggest U.S. pension system, in 2005 after three years on the board.

Pacific Corporate Group has no current business dealings with the Los Angeles Fire and Police Pension system, according to Meghan Houlihan, a spokeswoman for the firm. In 2005, the pension systemâs board approved investing in a PCG partnership, but the PCG fund ânever got off the ground and no investments were ever made,ââ a fund spokesman said.