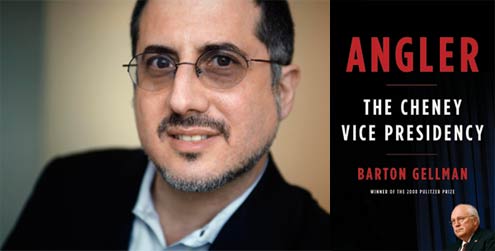 Washington Post reporter Barton Gellman has spent the last two years examining Vice President Dick Cheney’s time in office and the wide influence Cheney has had on policy. His book, Angler, was released last week. We talked to Gellman about why many caricatures of Cheney are wrong, and whose email the VP’s office has been peeping into.

This started out as a newspaper project. What was the genesis? Was it something you brought to your editor?

No, in fact, it was a newspaper project that was brought to me repeatedly and I kept beating it back.

Len Downie, the executive editor, really wanted a hard look at Cheney for the obvious reasons and I was worried about it for what I think were also obvious reasons. I just thought he was just too hard a target. I thought there was a big risk that after three or four or six months I’d come back and say, “Boy I really have not cracked this thing.” Len and others said it was worth a try. So they got me started and after a month or two Jo Becker joined me -- a great investigative reporter whom we lost to the New York Times.

I never had great confidence until very late in the game that we were going to have anything very revealing. That happened for the newspaper series [Ed note: The series won a Pulitzer Prize.]  And then I spent another year on the book. In fact, I got to well past the end of my target reporting time for the book and was getting the best stuff in it.

There is a sense, from an outsider point of view, that in waning years and months of the administration more people might be willing to talk.

Yeah, absolutely. They’re willing to talk especially when other people talked. And so, the thing starts to become self-reinforcing. It is the oldest method in the book.

You just make a list of everyone who might know something and talk to as many of them as you can and then you start around the circle again. It’s like borrowing money. You have to have some to get some.

Andy Card [former White House Chief of Staff] did not want to talk to me for the book and two or three times he refused. And, the last time I called him I said, “Here’s what I know,” and he started answering. I had enough information that it pushed some sort of button of his that made him want to answer.

In terms of the bigger picture, you suggest that the caricatured vision of Cheney -- the sort of Halliburton, you know, money grubbin’, oil lovin’ caricature -- is wrong and the evidence doesn’t point in that way.

That’s completely right. There are two or three common cartoons about Cheney that I think are just wrong. One has to do with venality. There’s no evidence whatsoever that he’s tried to line his pockets or the pockets of his friends or use the vice presidency as a stepping stone to some other job or goal or objective. He is serving the national interest as he understands it and he is a zealot in the good and the bad sense.

There is one other misconception, which that is he is a nasty man, and he is not. He is actually a much nicer guy in private than George Bush is. Bush when he’s anxious or angry, he will yell at people, humiliate them, embarrass them. Cheney never does that. He is so tightly controlled and he is the kind of guy who will walk out to the Secret Service detail in the motorcade on a cold winter morning and say, “We are going to be another 15 minutes or so.”

And yet, you also point to many incidents where Cheney appeared to be quite underhanded.

He is very upfront and sincere about what his ends are and how important he sees them. But he has been willing to cross pretty far in the direction of ends justify means. So there have been times when he simply hasn’t been honest with the public.

There have certainly been times when he hasn’t followed his own declared principles of how policy ought to be made. I mean if you care so much about outcome, at some point you say, inter-agency treaties which reach the least common denominator just aren’t as important as getting the answer right.

He knows what he wants almost always. Think how rare that is in any group of people you ever sat at a table and someone threw a hard question on the table or even, hell, should we have pizza or Chinese tonight, I mean most people are on the fence.

This guy’s never on the fence. That gives [him] a huge advantage.

There are a few lines in the book saying national security staff on the White House, and tell me if I’m correct here, were having their email bcc’d to the vice president’s staff.

That is correct. It was not just emails either. It was for certain sensitive documents. They travel by hand on paper and not electronically.

Now if you sent an individual email to an individual, that didn’t go to Cheney, but a lot of the business is done with little working groups.

Right, there was an open mailing list and then there was a blind mailing list. Now, it didn’t go the other way. If someone wrote an email inside the vice president’s office to someone else or to a working group it did not ever get to the NSC staff.

You explained that much of the way Cheney exerted his influence-- rather than, again this sort of caricature, that Bush was a marionette—you suggest, per the title of your book, that Cheney would work the angles.

Cheney and his staff would intercede at much lower levels, down to deputy assistant secretaries sometimes in order to find out what was brewing and to help shape options that would circulate up towards the president’s office. Part of what happens is that they kill proposals, so that it never even gets to the president. Cheney played there and that gave him quite a bit of influence.

Cheney acted, I think, probably always or nearly always in support of what he believed the president’s objectives were. But the distance between objectives to means to specific policy to specific choices can be very great, and it is certainly not true that Bush authorized and approved in advance everything Cheney did.

These things do ebb and flow. Cheney saw himself as restoring executive authority. I think it might be more accurate to say he was asserting executive supremacy. He has laid in place a lot of nuggets sort of buried around the federal register and in executive orders and regulations and procedures that a future president could use to do as Cheney thinks the future president should do, which is to act on his own. That is to say the executive is indivisible, is unitary, and it is none of Congress’s or the judiciary’s business how the president executes law.

I doubt, whoever the next president is, that that person is going to spend a lot of time and effort and energy to root out and to eliminate these new claims of power because first of all people don’t usually do that when they are sitting in a chair and say, “Well, you know, I think I like a little less power please.”

And even if they don’t think it is something they will ever want to use, why devote staff resources and possibly political capital to undoing something that to you is a very secondary matter. I have a feeling these nuggets will be there for a while.

But, part of Cheney’s legacy is that he over reached and got pushed back. The Supreme Court said, for the first time, that the president needs permission from Congress to have military tribunals, for example. Even though Congress turned right around and said, “well okay, you go right ahead,” that doesn’t mean that the presidency is not constrained by this.

So ironically, precedents of limitations of power have been set.

Yeah, precedents have been set that are not good for the presidency or for the unilateral declaration of executive power. Sometimes Cheney’s tactical victories led to strategic defeats.