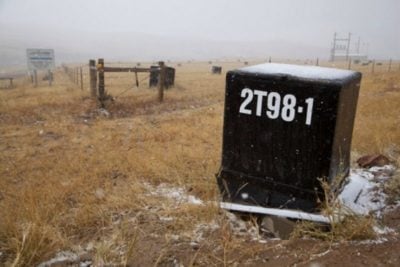 Federal environment officials have failed to adequately oversee hundreds of thousands of wells used to inject toxic oil and gas drilling waste deep underground, according to a new congressional report.

The report, released Monday by the U.S. Government Accountability Office, is critical of the Environmental Protection Agency's inconsistent handling of safety inspections, poor record keeping, and failure to adjust its guidelines to adapt to new risks brought by the recent boom in domestic drilling, including the understanding that injection wells are causing earthquakes.

The EPA generally agreed with the GAO's findings and characterization of the challenges the agency is currently facing.

Concerns have mounted recently about potential water contamination from injections wells. California officials have ordered an emergency shut-down of 11 oil and gas waste injection sites and a review of more than 100 others, out of fears that fracking fluids and other toxic waste are reaching drinking water aquifers there. Earthquakes from Ohio to Oklahoma to Texas have also been blamed on injection wells governed by the EPA's program.

The GAO's findings echo those in a 2012 ProPublica investigation which found that the nation's injection wells were often poorly regulated and experienced high rates of failure, likely leading to pollution of underground water supplies. ProPublica's investigation found that the EPA did not know exactly how many wells existed in the United States or what volume of waste was being injected into them, and that it did not possess complete records required to be collected under the Safe Drinking Water Act.

Oversight of injection wells is currently delegated by the EPA to a number of state agencies. Part of the problem, the GAO found, is that the EPA has not consistently inspected those state programs to ensure that state regulators comply with the Safe Drinking Water Act and EPA guidelines. The EPA also has failed to incorporate requirements it has placed on some of its state programs into federal regulations, making it difficult for the agency to take legal action against violators.

The EPA oversees more than 700,000 injection wells of various types in the United States, including about 172,000 that pump waste or other materials from the oil and gas industry underground. These wastes, often euphemistically referred to as "saltwater," commonly contain a mixture of water, hazardous chemicals and radioactive minerals. This subset of wells, called Class 2 wells, were the focus of the GAO report.

When waste material is injected thousands of feet underground, rock formations are supposed to prevent it from migrating into nearby drinking water sources. But this is not an exact science and regulators have been finding that fracturing natural rock formations and injecting liquids into them at high pressures can have real and troubling consequences. ProPublica's investigation found numerous instances in which waste had strayed from its target underground or spurted back to the surface, sometimes in residential areas.

Scientists interviewed by ProPublica said the wells were often located adjacent to fault lines which break the seal of rock layers, or old oil wells which also allow a pathway for contaminants to spread. The class 2 waste wells in question are not subject to the same rigorous geologic study, safety reviews, and regular monitoring that the EPA requires of other toxic waste injection wells from other industries, making it difficult for the EPA to enforce protections of underground drinking water supplies, ProPublica found.

According to the new GAO report, the EPA and state programs are also being hindered by budget constraints. Between 2003 and 2012, funding for state injection well programs stagnated at about $10 million a year, which — factoring in inflation — effectively meant resources had declined, the GAO concluded.

The report also blamed the EPA for not taking steps to collect complete, consistent and reliable data on injection wells to use for reporting at a national level, mirroring some of ProPublica's key findings.

"Unless EPA takes these steps, it will be several years before EPA can provide updated information at a national level to Congress, the public, and others on the [injection well] program, preventing them from understanding the program and the protection being provided to underground sources of drinking water at an important juncture in the development of oil and gas in the country," the GAO warned.

Read our coverage of injection wells to understand the risks involved in pumping waste underground and how regulators have been failing to police the oil and gas industry.