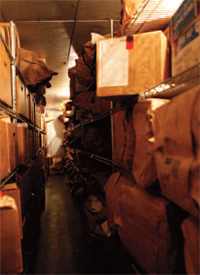 Based on interviews with police officials and a review of data obtained through public records requests, the report, "Testing Justice," revealed that the county's backlog is probably the largest in the nation. It's also larger and more widespread than previous reports had indicated.

The Los Angeles Sheriff's Department has 4,700 untested rape kits, which potentially contain DNA evidence taken from sexual assault victims. The police department's backlog, which was the subject of a ProPublica and Los Angeles Timesinvestigation in November, is currently more than 4,000 cases. LAPD officers never sent many of the kits to the department's lab, which is underfunded and understaffed, Human Rights Watch found.

LAPD officials say they hope to eliminate the backlog within four years. They began chipping away at it in January after hiring more lab technicians and outsourcing scores of rape kits to private labs for testing.

But time is not on LAPD's side. The backlog has allowed rapists and other dangerous criminals to escape detection and strike again. In one case documented in the report, a rape kit went untested for several months while the alleged perpetrator assaulted two other victims, including a child.

Evidence sometimes goes untested so long that the time limit for prosecuting the cases expires. Almost 500 kits -- including 188 at LAPD -- have been backlogged past the 10-year statute of limitations for rape in California, so it would be impossible to prosecute offenders even if the kits were tested today.

Half the kits law enforcement agents collected from the Santa Monica-UCLA Medical Center, the largest rape treatment center in the county, involve child victims who range from four months to 17 years-old. In some of these cases, prosecutors have postponed trials while waiting for kits to be tested, said Gail Abarbanel, the center's director.

"For a child to wait for a case to go forward is unacceptable," she said. "It doesn't feel like much has changed."

LAPD is not the only department facing a booming backlog.

The federal government released a study last year revealing that in 2005 labs across the country saw their DNA backlogs double. Causing the surge are new laws mandating that DNA be taken from more people and new technologies that make it possible to analyze small or degraded samples.

LAPD has been taking heat for its backlog since 2002, when it destroyed 1,100 untested rape kits, mistaking them for cases that had exceeded the statute of limitations.

Charlie Beck, the chief of detectives who is responsible for managing the backlog effort, said LAPD is just now showing signs of progress, but needs more money to buy equipment and hire DNA analysts.

"I'm happy with the way things are going," Beck said in an interview with ProPublica. "But I worry about the funding because things are so tight now," alluding to California’s budget crisis.

It's unclear why LAPD waited so long to tap the private labs.

Last year, Assistant Chief Sharon Papa, then in charge of overseeing the backlog, said private crime labs were too busy to test more kits. But the Human Rights Watch report revealed that LAPD later turned away a private lab that offered to test the backlogged kits. Because of that delay, LAPD's backlog won't be eliminated until 2013, even if Beck continues sending out 400 kits a month.

Abarbanel, of UCLA, believes that's unacceptable. "The whole value of DNA is the opportunity to test it quickly, and I don't think it's unreasonable to expect that," she said.

Part of the problem is that, until recently, detectives could decide which cases to send to the lab for testing. Kits that weren't sent would sit in police storage indefinitely.

Beck now promises that detectives will send every kit for testing, no matter how old the case. He will still use detectives' input, however, to decide which cases need to be rushed.

The Human Rights Watch report advocated additional changes at LAPD and the sheriff's office, including the creation of a county oversight board to track the progress of the backlog effort.

Tofte, the report's author, said LAPD should comply with a California law that requires police to notify victims if their kits aren't tested within two years of the crime. She also said the labs should use federal backlog reduction grants exclusively for testing rape kits. She was shocked to find that the sheriff's lab was using those funds to clear backlogs in homicide and property crime cases.

LAPD also has had trouble using the federal grants. The ProPublica-Los Angeles Times investigation revealed that LAPD failed to use about $2 million in federal funds dating back to 2005. As a result, the U.S. Justice Department cut LAPD's 2008 funding in half, about a $500,000 reduction.

Tofte said LAPD could look to New York City as a model for how to dig out of its backlog.

In 1999, the New York City Police Department had 16,000 rape kits sitting in storage. Four years and $12 million later, the backlog was eliminated. Kits were outsourced to private labs, more DNA analysts were hired, and every kit is now bar-coded so the lab, police and prosecutors can quickly track the progress of each case.