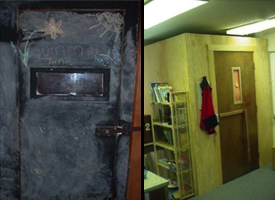 A disturbing new report (PDF) issued by the congressionally mandated National Disability Rights Network documents incidents from across the country of a problem that fewer than half of states address: the restraint and seclusion of disabled school children.

The Network's state chapters compiled a list of cases that "should shock you," according to the organization, which was created by federal law to advocate for people with disabilities.

Disabled children in Sumner County, Tenn., were locked in four-by-three foot plywood cells that had been put together by maintenance staff at 12 district schools. An Oklahoma student with autism was led around his school wearing a harness and rope. Since 2002, three children -- including a 7-year-old girl -- have died as a result of being restrained in public and private schools, the report says. Another boy locked in a seclusion cell hanged himself with his makeshift belt.

Are the cases isolated incidents? That’s what the Network's executive director Curtis Decker hopes to find out. The organization is releasing the report during a Capitol Hill press conference today and will be calling on the Obama administration to push for national tracking of instances of restraint and seclusion in schools.

"Our role is to identify this as a serious, growing problem," Decker told ProPublica. "Now it has to be turned over to administrators to get a handle on this."

Disability rights advocates say that since children with disabilities were granted the right to full inclusion in public schools 30 years ago -- a phenomenon often referred to as "mainstreaming" -- disabled children have been the frequent targets of coercive discipline.

While the disability advocacy community succeeded in seeking meaningful legal changes in the use of restraints in mental health facilities, schools are a new frontier.

Even in states where school restraints have been connected to deaths, reform has been slow to come.

In Wisconsin, the disability community was shocked after 7-year-old Angellika Arndt died May 26, 2006, after being held face-down on the floor of the Rice Lake Day Treatment Center. The girl, a foster child diagnosed with emotional disturbance, was restrained after blowing bubbles in her milk and defying time-out rules.

Kristin Kerschensteiner, managing attorney for Disability Rights Wisconsin, authored a report (PDF) concluding the state failed to reduce the use of restraint and seclusion following the girl's death.

"We've been working on this for more than two years now and nothing is happening," Kerschensteiner told the Milwaukee Journal Sentinel.

The state's Department of Health Services, in response, issued a statement to the Sentinel noting that it took strong actions leading to closure of the facility and will continue on a statewide effort to "work with our partners to issue additional guidance on the dangers of the use of seclusion and restraint."

In California, Leslie Morrison, Disability Rights California’s leading investigative attorney, issued a June 2007 report documenting multiple cases of misuse of restraints, including that of a 10-year-old non-verbal boy who was tied to his wheelchair for hours and left on the school van on two separate occasions.

Morrison's group championed legislation that would have mandated that only trained school personnel could restrain children -- and only in instances in which the child's behavior put others at risk of physical harm.

Gov. Arnold Schwarzenegger vetoed the bill in September, though, noting that it could inhibit school staff from "intervening in an emergency situation and place more students at risk of potential harm."

The national report, however, does document some small victories. Advocates prevailed on behalf of individual students, and the Tennessee school district agreed to dismantle the plywood boxes.

Ultimately, Decker said he's hoping to see more tracking and regulation of the problem and training in "positive behavior supports," a research-based system believed to reduce the need for extreme punishments.

At the very least, he said, he’d like to see a change in the federal IDEA law, which outlines how education should be funded for more than six million students with disabilities.

Decker's organization included an excerpt from a March 2008 government letter describing the program’s philosophy: "While IDEA emphasizes the use of positive behavioral interventions… IDEA does not flatly prohibit the use of mechanical restraints or other aversive behavioral techniques for children with disabilities," the letter says.