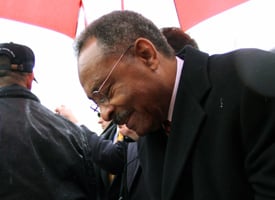 At a news conference this morning, Senate Majority Leader Harry Reid (D-NV) disavowed an earlier AP report that Senate Democrats had agreed to accept Roland Burris as Barack Obamaâs replacement in the Senate.

But one day after refusing to seat Burris, Reid didnât close the door on him either.

Reid said a decision on the Senate seat will wait for a decision from the Illinois Supreme Court on whether Burris needs to have his appointment signed by Jesse White, the Illinois secretary of state. White refused to sign off because embattled Illinois Gov. Rod Blagojevich appointed Burris.

Senate officials refused yesterday to seat Burris because his credentials âwere not in order,â according to Burris. That is, they did not have Whiteâs signature.

Reid and Sen. Dick Durbin (D-IL) met with Burris this morning for about 45 minutes to discuss the seat, a meeting that Reid described as âvery enlightening.â

Reid described Burris as âcandid and forthright.â Burris is an âextremely nice manâ who âpresents himself very well,â Reid said.

Yes, all of this means that Burris still is not a senator. But donât tell Burris that. After being turned away from the Capitol yesterday, Burris introduced himself to reporters as âthe junior senator from the state of Illinois."

Burris' cause received a boost yesterday when Sen. Dianne Feinstein (D-CA), who chairs the Senate Rules Committee, said that Burris should be seated.

Burris, a former Illinois attorney general, will testify tomorrow before a state committee considering whether to impeach Blagojevich. Reid said this testimony will be important in deliberating the future of the Senate seat.

We will stay on âBurris Watchâ and report back when we know more.