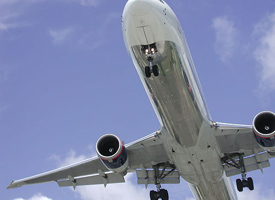 After a ProPublica investigation found that dozens of air marshals have been charged with crimes, the director of the Air Marshal Service sent an agency-wide e-mail (PDF) stating, "We must dedicate ourselves to root out and report any instance of misconduct or criminal behavior."

But a new report being released today (Tuesday, Nov. 25) by a government watchdog group, the Project on Government Oversight, says that current and former air marshals have been shut out and retaliated against when they tried to report problems to the U.S. Office of Special Counsel, an independent federal agency that protects whistleblowers.

"The POGO report describes in great detail what actually happens to federal air marshals when they do come forward to root out misconduct and criminal behavior,â said P. Jeffrey Black, a Las Vegas air marshal and whistleblower. After he testified before Congress in 2004 about security breaches, Black says the air marshal service launched an investigation into whether he released sensitive information.

Air marshal spokesman Greg Alter said his agency had not yet reviewed the POGO report. In an e-mailed statement (PDF), he said the agency has "zero tolerance" for retaliation.

"Any Federal Air Marshal Service employee who in good faith reports waste, fraud, abuse, mismanagement or a violation of law or agency policy shall not be subjected to any form of harassment, adverse employment consequences or other form of retaliation,â he said.

The Office of Special Counsel is supposed to be a refuge for government whistleblowers -- a place where complaints of corruption, abuses of power and security lapses are aired and exposed. POGO cited interviews with nearly a dozen current and former air marshals to assert that the agency has closed cases without investigating and failed to shield whistleblowers from retaliation.

The report places much of the blame on Special Counsel Scott Bloch.

Bloch went on administrative leave in October, five months after the FBI raided his home and office as part of an investigation into obstruction of justice. One of the accusations is that Bloch hired Geeks on Call (instead of the agency's computer technicians) to perform a "seven-level wipe" and erase all the files on his office computer. Bloch has said he was trying to get rid of a virus.

POGO decided to have a look-see and found that several air marshals felt the special counsel hadn't helped. In some cases described in the report, the office did follow-up, but the whistleblowers weren't satisfied with the extent of the investigation or the result. In others, air marshals said the office stood by while they were harassed, disciplined or fired.

The report cites the case of one air marshal who took a photograph of a suspicious individual at an airport in August 2004. He pressed his supervisors to forward the photo to the FBI for further investigation. After they didn't, he complained to Bloch's office in March 2005.

As the air marshal waited for OSC to start investigating, the report says, he was subjected to hostility at work, including several attempts to fire him. The OSC completed its investigation in February 2007 and decided not to take any action, according to the report.

The air marshal was fired three months later after the service discovered he had obtained a fake degree from a diploma mill, although he never used it when he applied to become an air marshal.

"The horror stories from everybody elseâ" convinced air marshal Spencer Pickard to go to ABC News in 2006 with concerns about the air marshals' dress code rather than complain to the special counsel, the POGO report says. After Pickard and others argued that mandatory business attire blew their cover, Congress investigated and the service relaxed the dress rules.

Pickard, who is no longer an air marshal, was placed on administrative leave a few weeks after speaking out.

Bloch's attorney, Paul Orfanedes, said POGO has an ax to grind. In 2005, the group joined a whistleblower complaint alleging that Bloch had retaliated against his own employees, which Bloch's attorney denies.

"I think he is very proud of his work with the Air Marshal Service and in doing what really the law allows the OSC to do, which sometimes isn't enough for advocacy organizations," said Orfanedes, who has represented whistleblowers. "There's always a fair amount of unrealistic expectations of what the law allows and, therefore, dissatisfaction with the result."

OSC spokesman Anthony Guglielmi said the office didnât want to dwell on the past and is focused on getting prepared for the next administration.