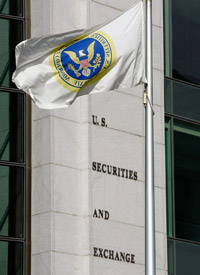 Four years ago, the SEC made what appears to be a fateful decision. As ProPublica and others have reported, the commission exempted major investment banks from limits on how debt versus cash they could have. After the change, the debt held by the firms soared. And many, including a former SEC official, have pointed to the change as one of the roots of the current crisis.

Today's New York Times explains exactly how the SEC came about its decision. It’s not pretty. The paper zeros in on "a brief meeting on April 28, 2004":

On that bright spring afternoon, the five members of the Securities and Exchange Commission met in a basement hearing room to consider an urgent plea by the big investment banks.

They wanted an exemption for their brokerage units from an old regulation that limited the amount of debt they could take on. The exemption would unshackle billions of dollars held in reserve as a cushion against losses on their investments. Those funds could then flow up to the parent company, enabling it to invest in the fast-growing but opaque world of mortgage-backed securities; credit derivatives, a form of insurance for bond holders; and other exotic instruments.

Only one commissioner questioned the proposal, noting "We've said these are the big guys, but that means if anything goes wrong, it's going to be an awfully big mess." (The Times helpfully posts the full audio of the meeting.)

The proposal, which was quickly passed, also included a provision that would have allowed the SEC to get a clearer picture of just what deals the investment banks were making with the new leverage. But as the Times notes, "The agency never took true advantage of that part of the bargain."

The firms were only required to self-report their holdings. As for verifying the companies' numbers, the SEC did not exactly make it job number one:

The commission assigned seven people to examine the parent companies -- which last year controlled financial empires with combined assets of more than $4 trillion. Since March 2007, the office has not had a director. And as of last month, the office had not completed a single inspection since it was reshuffled by [SEC Chairman Christopher] Cox more than a year and a half ago.

As ProPublica noted earlier this week, the SEC abolished the exemption last week, concluding that the big investment banks can no longer be so highly leveraged. Cox said in a statement the program "was fundamentally flawed from the beginning." Of course, the five investment banks that enjoyed the exemption are no longer. Three have folded and the other two are converting themselves to more traditional (and more highly regulated) commercial banks.