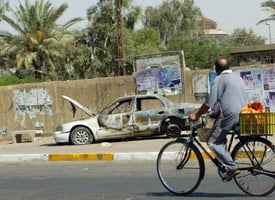 Iraqi leaders have continually pushed to revoke the controversial Order 17, passed in the final days of the Coalition Provisional Authority to immunize contractors from Iraqi law. Recent news reports about Iraqi-U.S. negotiations indicate that the Iraqis may prevail. But because of inaction by Congress, the loophole for State Department contractors remains in U.S. law.

Closing the legal loophole that makes prosecuting the Blackwater guards so unlikely -- as illustrated by the Justice Department's public difficulties in finding the legal authority to prosecute guards for last September's Nisour Square shooting -- has proven extremely difficult. Blackwater has said its guards acted only after coming under fire.

Passed 389-30 by the House two weeks after the Blackwater shootings, the bill has never come to a vote in the Senate, where it is sponsored by presidential candidate Barack Obama (D-IL). The administration has strongly opposed the bill. The White House did not reply to our request for comment.

"We are nearing the one-year anniversary of the killing of 17 civilians by security contractors at Nisour Square in Iraq, and not a single one of those responsible has been held accountable because of a gap in U.S. law," Rep. Price told ProPublica. "The decision by the administration to block it in the Senate is a serious affront to the rule of law and to the efforts of our military service members in Iraq."

But experts have expressed doubts whether applying U.S. laws abroad is even a realistic option. Since MEJA was first enacted in 2000, DoD has referred only 58 cases to DoJ -- only 13 resulting in charges.

"It's incredibly complicated to apply civilian law 7,000 miles away and in the context of a war zone," Peter Singer, a defense expert with the Brookings Institution, told ProPublica. "You have to consider rules of engagement and decisions made in a battle situation. You have to get evidence and witness testimony from 7,000 miles away. There's really no legal precedent that says this would work."

Some legal experts have floated the possibility of applying the Uniform Code of Military Justice -- the courts martial system -- to contractors abroad. As with MEJA, there's very little precedent for applying military justice for contractors, and defense attorneys would likely question its constitutionality.

The independent Congressional Budget Office noted the impracticality of extending the courts martial system in a recent report (PDF) on contractors in Iraq: "Using the UCMJ to prosecute civilians, even during a war, may generate constitutional challenges based on the standards of due process applicable to military courts."

Holding security contractors accountable for criminal acts depends in large part on government oversight. The GAO questions (PDF) the long-term sustainability of recent improvements in oversight and incident reporting by the Pentagon and the State Department, the government's primary contracting agencies in Iraq. The GAO does commend the agencies for improving coordination and lines of authority and reporting.

But most experts are concerned that the issues behind the Blackwater incident remained unresolved.

"Poor coordination was not the cause of these shooting incidents or why those responsible haven't been properly punished," Singer said. "No one should walk away thinking that the problem is solved."