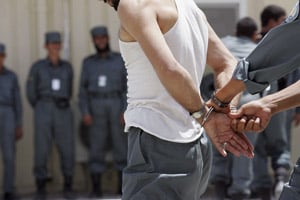 State and Defense department officials took a tongue-lashing today, trying to explain to a Senate subcommittee how the government has poured $6 billion since 2002 into building an effective Afghan police force with disastrous results.

ProPublica and Newsweek examined the problems with police training in Afghanistan in a story published last month. The program, managed under a contract with DynCorp International, has faced challenges on every front, from recruitment to inadequate training periods to corruption to poor officer retention.

"Everything that could go wrong here, has gone wrong," Gordon S. Heddell, the inspector general of the Department of Defense, acknowledged to an ad hoc subcommittee of the Senate Committee on Homeland Security and Governmental Affairs. Heddell's office, along with the State Department's Inspector General, completed a six-month audit in January of the program that found significant lapses.

Sen. Claire McCaskill, D-Mo., the subcommittee chair, and others on the panel were less interested in rehashing the program's well-known shortcomings and more interested in hearing about solutions. "What you laid out was a problem we knew in 2001," said Sen. Edward Kaufman, D-Del., in response to comments from Heddell. "What are the two or three things you can spend $6 billion on and not end up with essentially nothing?"

Defense and State Department officials agreed that clearer guidelines for the contractor and more oversight are needed to improve the program. Currently, the State Department has just seven contract overseers in Afghanistan, said David T. Johnson, an assistant secretary for the State Department. The agency hopes to have 22 in place by September, Johnson said.

Another key would be to make training ongoing, rather than just the six weeks that police recruits are getting now, said David S. Sedney, a deputy assistant secretary with the Defense Department. "This is not a weeks- or months-long [process] -- it's a years-long process," he said, adding that police need to be partnered with American military and more experienced Afghan troops on whom they can model their behavior.

Even if the program makes headway, some senators questioned whether it would be sustainable without a massive ongoing commitment from U.S. taxpayers. The Afghan police and army are slated to receive $11.6 billion to fund their operations for 2011, with just over half going to the police, Sedney said. McCaskill pointed out that's only $2 billion less than the entire country's Gross Domestic Product.

"It's obvious that Afghanistan is not going to be able to afford what we're building for them," she said. The U.S. has made a "billion-dollar commitment for years to come."

The government is already exploring whether a change in contractors might benefit the police-training program. DynCorp's contract has been extended for several months, but the State Department has issued a call for new bids, hoping an array of companies will step up to compete for the job, Johnson said. McCaskill was skeptical, however.

"I will be shocked -- like winning the lottery -- if we end up with anybody other than DynCorp," she said.