A post-9/11 rule barring refugees and asylum-seekers who supported foreign guerrilla groups from entering the country -- regardless of the type of group or whether the support was voluntary -- continues to plague Department of Homeland Security officials trying to untangle the bureaucratic mess. 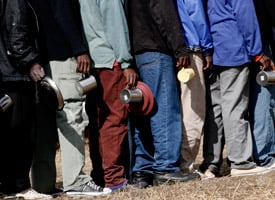 A little-noticed part in the U.S.A. Patriot Act, the “material support” provision, aims to close the borders to supporters of terrorism. But the provision turned out to be so broad that it barred thousands of people unconnected to terrorist groups, including those who were coerced to give support at the barrel of a gun. (A Sri Lankan fisherman, for instance, was held by U.S. immigration authorities for two years after he acknowledged paying a ransom to the Tamil Tigers after he was kidnapped.) Nor did it make an exception for individuals who had simply supported groups aligned with the U.S.

The Bush administration, which has long faced criticism from both the left and right about the material support bar, announced in January 2007 that it was moving to address the problem and give exemptions to otherwise worthy applicants caught up in the law. Two types of exemptions were created: one for those who provided material support for a known terrorist group under duress -- known as a "duress waiver;" and another for those who supported a guerrilla group that does not oppose U.S. interests.

"I appreciate the point that [changes to the law] have been slow in coming, and certainly we share that point, but we are determined to continue to try to adjust the balance here so that legitimate asylees, refugees, and applicants for admission can come to and remain in the United States," J. Kelly Ryan, a senior State Department official on refugee issues, said in April 2007 at a Heritage Foundation conference on the issue.

But since DHS issued the first waivers in early 2007 to a narrowly-defined subset of asylum-seekers and refugees eligible for these exemptions, the process to expand them to a broader group seems to have stalled. Thousands of refugees and asylees are now in a holding pattern. They have seen little progress since earlier this year, when a DHS official said it would withhold verdicts on individual cases until it works out its internal process.

Before any exemptions for duress can be handed out, DHS has decided to first do an "intelligence review" of the group that the person was forced into supporting. For instance, before the Sri Lankan fisherman can get an exemption, DHS first has to complete an "intelligence review" of the Tamil Tigers. DHS has said it needs to verify that each group indeed uses coercive methods and whether they would conceivably exploit the U.S. immigration system for terrorist purposes.

Of 103 terrorist organizations listed by the State Department, just three have been reviewed.

"There hasn't been much movement at all," said Melanie Nezer, an expert on refugee issues for the Hebrew Immigrant Aid Society. "Whereas before they were denying cases that shouldn't have been denied, now they're on hold indefinitely. To me, that doesn't really constitute forward movement."

DHS hasn’t responded to our requests for comment. But in Senate testimony last fall, DHS Deputy Assistant Secretary for Policy Paul Rosenzweig said, "[T]he Administration has agreed to a very careful, judicious process to assure that our national security is fully protected even as we fulfill our humanitarian objectives."

But advocates question the logic behind these intelligence reviews.

"What difference does it make if your son was kidnapped by a designated terrorist group or a non-designated group? It's not like you're volunteering for either," said Nezer.

According to DHS, the U.S. has issued 202 duress waivers -- all for supporters of the three groups so far reviewed. (All three are guerrilla groups from Colombia.) DHS didn't respond to our questions about how many duress claims are pending. But in April 2007, DHS's Rosenzweig told an audience at the Heritage Foundation that there were "a little more than 1,000 cases on hold that we think might implicate duress-based claims."

"These are typically the scariest groups -- a lot of them have a long record of subjecting civilians to various forms of coercion," said Anwen Hughes, an attorney with Human Rights First. "I honestly don't know why it's so delayed. The decision-making seems to be taking place at a very high level."

Another set of people caught up in the expansive material support provision are those who aided any group that used arms against a state -- regardless of whether the group's efforts aligned with U.S. foreign policy. (In a 2006 immigration court case, a DHS attorney acknowledged that any Iraqi who helped U.S. troops during the 2003 invasion of Iraq would technically be considered a supporter of a terrorist group and barred from the U.S. under the material support laws. "[T]he position of the Department is...extremely broad," the DHS lawyer said. "The Congress intended it that way... to be able to capture all potential forms of... material support to terrorist activity.")

As with duress waivers, DHS has created an exemption process for supporters of those groups who pass an intelligence review, yet it too is moving slowly.

DHS has only approved 10 such groups for exemption to the material support bar. Because these groups are defined as any guerrilla organization of two or more people, it is nearly impossible to determine their number. DHS did not respond to our request for comment. But Hughes from Human Rights First estimates that thousands of people have been denied entry for being associated with such groups.

Pressed by members of the Senate Judiciary committee in a September 2007 hearing, Rosenzweig explained the complexity of solving these problems -- and promised to address them.

"I am confident the newer ones [intelligence reviews required for duress waivers] will go more quickly, and you will see additional extensions of... duress waivers, I would say for sure, this calendar year.

"You have my unreserved commitment," he said.