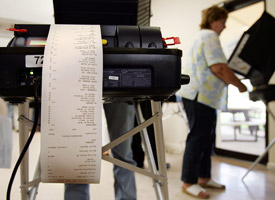 After the 2000 election, the nation that first sent a man to the moon set for itself what seemed an attainable technological goal: ensure that states had efficient and reliable voting machines. In 2002, Congress passed the Help America Vote Act (HAVA), which allocated nearly $3 billion to the states for election administration. But eight years later, with an election fast approaching, the system is still characterized by the same panicked improvisation.

At least $1.2 billion went towards new voting machines between 2003 and 2007, McClatchy reports. But many states (Alaska, California, Florida, Iowa, Maryland, Tennessee and New Mexico) that bought touch-screen machines have decided to replace them due to concerns about their reliability. In a number of places, that process won't be completed until long after the 2008 election.

Ohio's secretary of state recently sued to recover the $83 million in state funds spent on touch-screen machines, yet the machines will nevertheless be used in November. The machines will still be widely used in dozens of other states, but the trend, McClatchy reports, is apparent:

Election Data Services, a consulting firm that specializes in elections, estimated that half the electorate used touch-screen voting in 2006. This year, less than a third will be using the touch screens.

Meanwhile, while the states struggle with the reliability of new technologies, the federal commission formed by HAVA to help set national standards has yet to certify a single machine or software package. And it won't be able to be any help before Election Day, the New York Timesreports.

The simple reason for this seems to be that the Election Assistance Commission has established a rigorous testing regime. As the chair of the commission puts it, "We simply are not going to sacrifice the integrity of the certification process for expediency."

That’s faint comfort to states left to decide which technology to use this November. A number of states even have rules or laws requiring federal certification. The commission's tardiness has precipitated a movement by states away from relying on the commission. Ohio, site of election controversy in 2004, is typical of the grumbling by state election officials. According to the Times:

In Ohio, for example, which requires federal certification, election officials found that in this year’s presidential primary the touch-screen machines used in 43 counties, or by more than three million voters, dropped at least 1,000 votes as memory cards sent data to the central server in each county. The discrepancy was caught and corrected before final tallies were calculated, but election officials say the risk is too high. The newer software being provided by manufacturers fixes the problem, but it has not been certified, and so the state cannot use it.

Cuyahoga County, the most populous county in Ohio, plans to use a type of optical scan machine that lacks safeguards to prevent election officials from tampering with the ballots and affecting tallies, said the Ohio secretary of state, Jennifer L. Brunner. Those safeguards do exist on a later model, she said, but it remains uncertified.

"We need the federal oversight to create consistent standards and to hold the manufacturers to a certain level of quality, but we also have to be able to get the equipment when we need it," Ms. Brunner said. "Right now, that equipment is not coming, and we're left making contingency plans."