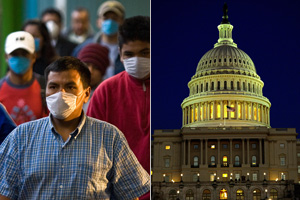 The story about Republicans cutting stimulus money to fight swine flu has spread like, well, a pandemic flu. But there's much more to this story.

The issue was first reported Monday morning on the Web site of The Nation magazine under the headline: "GOP Know-Nothings Fought Pandemic Preparedness."

The gist, as we noted earlier, is that the stimulus bill included $870 million "to prepare for and respond to an influenza pandemic." But the money was dropped in final negotiations. At the time, both Sen. Susan Collins, R-Maine, and Sen. Charles Schumer, D-N.Y., were quoted suggesting that funding for pandemic flu preparation didn't belong in the stimulus package.

With an outbreak of swine flu having killed more than 100 people in Mexico and cases reported in the U.S. and around the world, the story made for rapid-fire debate. Major newspapers picked up on it. Politicians put out statements. And the story was a hot topic on cable news shows. In short, it was what old media calls a "scoop," what cable news calls "buzz," and what the blogosphere calls "viral."

Most important, it had someone to blame.

"Collins played politics with public health and the economic recovery," wrote John Nichols, the author of The Nation article. "That makes her about as bad a player as you will find in a town full of bad players."

The Nation story had more nuance, but as it made its way through the blogosphere, it morphed into nothing more than a tweet.

"Thank you Sen. Susan Collins for stripping pandemic protection funds from the budget, right before the swine flu outbreak," someone identified as  "maestro767" wrote on Twitter. "Way to go!"

But one question is whether the additional funding would have had any impact on the swine flu outbreak.

Probably not, according to government officials and public health experts. Most of the health research being funded by the stimulus package hasn't begun or even been decided yet. And officials at the White House and the Centers for Disease Control and Prevention say the government is funded well enough to deal with the outbreak.

The stimulus money would have been for the future.

Another implication is that Republicans have been standing in the way of flu money.

"We have been trying to get adequate funding to prepare the nation for a pandemic outbreak since 2005," Rep. David Obey, chairman of the House Appropriations Committee, said in a statement. "We tried again as recently as January in the economic recovery package."

Here, the record is more mixed.

Since 2005, Congress has approved $6.1 billion for pandemic preparations. Sen. Collins' spokesman said she has supported flu research but thought that it should be handled through the regular appropriations bills. An appropriations bill introduced less than a week after the stimulus funding was cut included more than $500 million to fight pandemic flu. Obey, D-Wis., was a key architect of both bills. Here's the chronology:

As part of the stimulus package, Obey included $420 million for pandemic flu preparedness in the House bill. Here's how that read:

"... to prepare for and respond to an influenza pandemic, including the development and purchase of vaccine, antivirals, necessary medical supplies, diagnostics, and other surveillance tools, $420,000,000 ..."

In the Senate version, that funding was upped to $870 million. The money was ultimately cut.

But six days after President Obama signed the stimulus package, Obey formally introduced the omnibus appropriations bill to wrap up budget requests for a fiscal year that was already four months old. Here's how that read:

"... to prepare for and respond to an influenza pandemic ... of which $507,000,000 shall be available until expended, for activities including the development and purchase of vaccine, antivirals, necessary medical supplies, diagnostics, and other surveillance tools ..."

Sound similar? The omnibus also included $60 million to prevent and control bird flu and additional money for the CDC. So what gives?

Kirstin Brost, a spokeswoman for Obey on the appropriations committee, said the money in the stimulus package would have been additional funding. The $500 million in the omnibus was long planned. Indeed, it was in drafts of the bill that passed in committee last June.

Rich Hamburg, director of government relations at the Trust for America's Health, explained it to us. (The Trust advocates for more disease research, "from chemical terrorism to cancer.")

Since then, Congress has approved $6.1 billion. There were two final pieces to be funded in the 2008 and 2009 budgets. But in 2008, funding stalled. Congress requested $650 million, but the bill was vetoed by President Bush and Congress failed to override. In 2009, Congress requested $500 million, but with the lame-duck session, the vote got pushed back until after the stimulus package.

The upshot: The nugget of criticisms this week was true -- flu funding was cut in final negotiations of the stimulus plan. But important details got lost in the mix.

While more than 90 percent of President Bush's request has been funded, Hamburg and others say the government is still unprepared.

"The goal is to be able to manufacture capacity to produce enough vaccine for the American population within six months of identifying the strain," Hamburg said. "They have resources to deal with it at the current level of the swine flu. But long term, should this be a national pandemic, they're not completely where they want to be."

To that end, President Obama requested $1.5 billion in emergency funding to stockpile antiviral drugs, develop a vaccine and assist other countries to stem the swine flu outbreak.