Your feedback makes our journalism better. Take the Survey 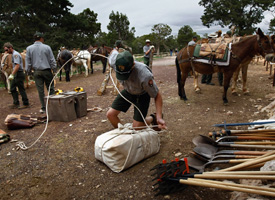 The uproar over the Obama administration's reheated promise to accelerate stimulus spending this summer continues. A video showing how job losses have far outpaced the administration's predictions made the rounds yesterday, while editorials like this one in Forbes say the stimulus was a mistake. In my home state — Vermont — several projects have been put on hold. "Probably some of these programs, if there had been no stimulus bill at all would have gone forward. We're all ready. We came to the gate and that gate's not open," said Tom Evslin, the governor's chief recovery officer, reported WCAX.com. (If you're interested in figuring out just how ready the states were to spend stimulus dollars, join our team of ProPublica readers who've adopted a stimulus project in their area.)

Vice President Joe Biden is a one-man recovery engine. Friday he hits up Michigan after stopping in Pennsylvania and Kansas tomorrow.

You probably didn't see this coming. Yesterday the Obama administration announced its intentions to reintroduce Paygo. The New York Timesheadline -- "One Day, Obama Pitches Stimulus Spending. The Next, He Urges Saving Money" -- says it all. "The ‘pay as you go' principle is very simple,'' Obama said. "Congress can only spend a dollar if it saves a dollar elsewhere." So it's Paygo AFTER we spend all the stimulus funds, right? Here's how budget director Peter Orszag explained the discrepancy at yesterday's press briefing.

Lawmakers are lobbying agencies to fund projects in their districts and states, reports USA Today.

Looks like South Carolina has its own fuzzy stimulus equation: where we would be without the stimulus + where we are with the stimulus - the legal fees behind a recent Supreme Court ruling forcing Gov. Mark Sanford to accept stimulus funds.

The CDC Only Tracks a Fraction of Breakthrough COVID-19 Infections, Even as Cases Surge

What the US Didn’t Learn in Afghanistan, According to the Government’s Own Inspector General