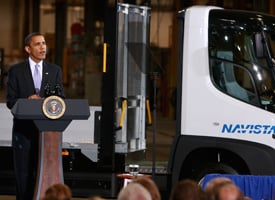 President Obama returned to Elkhart, Ind., on Wednesday to announce $2.4 billion in federal grants for electric automobiles. Elkhart has been hit particularly hard by the recession, as ProPublica has reported in the past. (The city is one of eight we track as part of our StimCities feature.) As ProPublica reported on Wednesday, however, many such struggling counties have been left out of the stimulus. Though the Recovery Act calls for stimulus money to target economically distressed areas, our analysis shows this is hardly the case.

State and federal officials say the stimulus has created 2,130 transportation jobs in Minnesota, the news site TwinCities.com reports. Minnesota Rep. Jim Oberstar, the chairman of the House Transportation and Infrastructure Committee, said the stimulus is working for his state. Oberstar's job claims make us think back to ProPublica's previousreports that the job numbers from Congress rely on a fuzzy math, which even the White House admits leads to double-, triple-, and even quadruple-counting of transportation workers.

State auditors in New Jersey have sounded the alarm over weak stimulus oversight. The Star-Ledger's Josh Margolin reports that auditors found "lapses in oversight and transparency among local and county government agencies." The State Auditor's Office told New Jersey lawmakers that one city, which wasn't identified, has "ineffective controls over the preparation of its financial statements." The State Comptroller's Office responded that it is working with the auditor to ensure "adequate audit coverage of recovery act dollars."

Dallas Mayor Tom Leppert has joined the ranks of stimulus critics, the Dallas Morning News reports. Leppert told the city council on Wednesday that though his city has been promised more than $108 million, "we haven't received any dollars." Leppert accused the state government of taking an "administrative fee" from transportation money it receives from the federal government. A spokesman for the Texas Department of Transportation said there was "no information to support such a claim."