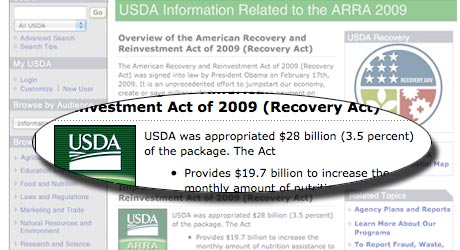 One of our goals for tracking the $787 billion stimulus package is figuring out how much each federal agency is actually spending — something that's trickier than it sounds: The numbers on each agency's Web site are far from clear, and they don't always add up with other publicly available figures.

Consider the U.S. Agriculture Department. The department's Web site dedicated to the stimulus says, "USDA was appropriated $28 billion (3.5 percent) of the package."

So Congress authorized USDA to spend a total of $28 billion in stimulus funds at some point in the future. But how much of that is actually in the process of getting spent right now? There's no one clear answer to that.

A stimulus dollar's journey starts with appropriation in Congress and ends when it's paid out to a contractor. But the middle part of that equation involves a trek into the murky world of spending terminology.

Different bureaucratic terms are used for different stages in the process, and different federal agencies seem to use these terms interchangeably. That, coupled with the fact that some federal Web sites are more up to date than others, makes tracking spending — the key to public transparency — equal parts accounting and detective work.

We tried making sense of the USDA's numbers.

On the USDA Web site, there's an interactive map that shows a state-by-state breakdown of USDA projects funded by the stimulus. We added up the total amount spent in each state and got $5.4 billion. The figures on the map are not dated, so there's no way of knowing how current they are.

Meanwhile, under a table titled "Funding Notifications by State" on Recovery.gov, the federal government's hub for stimulus information, it says the USDA has allocated just over $610 million nationwide. Elsewhere on the site, it says that $1.68 billion has been "paid out."

But if the USDA has allocated just $610 million, how can it have already paid out nearly three times that much?

To try to clear things up, we took a look at Recovery.gov's interactive map that breaks down "funding notification" by both agency and state. We added up USDA spending for each state. The total? A mere $362 million, or about one-fifth of what Recovery.gov lists as paid out. Like the data on USDA.gov, no date is given for the figures on the Recovery.gov map, so it's hard to know how recent they are.

Ed Pound, director of communications for the Recovery Transparency and Accountability Board, which manages Recovery.gov, said the site is still a work in progress and that he couldn't explain the different figures. "We're not in the business of verifying the data," he said. "Our job is to put this stuff up that we receive from federal agencies."

A spokeswoman for the USDA, asked about the discrepancies between figures on USDA.gov and Recovery.gov, refused to comment for the record.

So to sum up, we have one federal department, with four different numbers for stimulus spending, some of which are perfectly clear — and some not so much. "Available" versus "allocated," "obligated" versus "committed," "invested" versus "notified," "funded" versus "paid out" — your typical taxpayer would need an advanced degree in accounting to figure out just how much of his money is being spent.