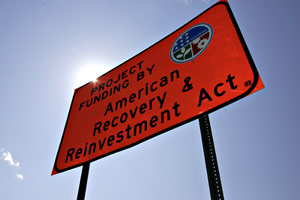 The Obama administration has spent $179 billion in stimulus funds, according to the latest numbers from Recovery.gov. Combined with an estimated $93 billion in stimulus tax cuts, that means the government has now moved at least $272 billion into the economy, or 34 percent of the total amount approved by Congress last February.

You can find those numbers and more on our Stimulus Progress Bar.

Particularly attentive readers will note that we've been using the $93 billion figure for tax cuts since December, when Recovery.gov posted the number in this report from the Office of Tax Analysis, a unit of the Treasury Department. That report only covered the period through the end of October; some may wonder why we haven't given more recent figures.

The answer is that those numbers aren't available. The Treasury Department hasn't responded to ProPublica's requests for more recent information. We're not the only ones looking for the information; Ed Pound, spokesman for the Recovery Accountability and Transparency Board, which runs Recovery.gov, told ProPublica that the Treasury Department has yet to provide the board with updated numbers on tax relief.

We'll post those updated numbers once they're available. In the meantime, you can check all our stimulus spending figures on our interactive Stimulus Progress Bar.