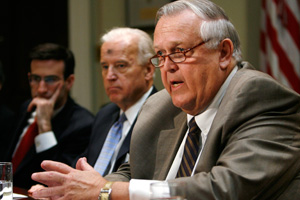 Earl Devaney may have the hardest job in America. As chairman of the Recovery Accountability and Transparency Board, the independent agency created by Congress to monitor stimulus spending, he is charged with tracking three quarters of a trillion dollars — and making sure the public can track that spending, too, through a Web site called Recovery.gov. ProPublica sat down with Devaney recently in his office near the White House to ask how this former Secret Service agent and Department of the Interior inspector general looks at his new responsibilities.

Excerpts have been edited for brevity and clarity.

ProPublica: How do you see your job? Is it more about providing information, or are you still an inspector general at heart?

Earl Devaney: At least half of the mission is creating a historic Web site that purports to show all Americans, or for that matter anyone in the world, how the government is spending this $787 billion. We will be displaying for the very first time, to Americans, how the government is spending their money. That kind of information has never really been available to either citizens or reporters in the past, and now it will be.

That's almost half the mission. Because there's not a whole lot of money to be stolen or wasted at the moment, relatively speaking, [the Web site has] been almost entirely consuming our time here. Having said that, we do have staff working on the fraud or waste piece of the mission, which is the other half.

We do have some unusual tools. We can hold a hearing, we can subpoena individuals, which no other inspector general can do. And we can do any amount of reviews or reports we want, on any subject, having to do with any of the money. But rather than look at ourselves as a group of people who go out and try to do those kinds of things — go out and do an audit, or go out and do an investigation — we very much have fashioned ourselves as the coordinator of those efforts, to be the place that looks out over the whole landscape and refers matters that come to our attention out to the appropriate IG [inspector general] to do the audit, to do the review, whatever needs to be done.

Q. Part of the task is data quality — making sure what goes up is accurate. Whose job is that?

A. The division of labor, as I view it, is that we’re in charge of the Web site, and that OMB [the Office of Management and Budget] is in charge of the data requirements and the data quality. Were we to learn in the process of an investigation, or because we've analyzed the data in a certain way, that someone seems to be deliberately falsifying data, we would get all over that.

And at some level, if the data in our Web site does not match the data, for instance in USAspending.gov or any of the other fed Web sites, it's OMB's problem to resolve that.

Q. The Recovery Board is an independent agency, but OMB is not.

A. I understand how they are a creature of the administration, but they are, for better or worse, the government entity in the executive branch that issues the requirements for any kind of data revolving around a procurement of contract. Congress wrote a law — I didn't participate in that; if I did, I would have changed a few things — they wrote a law, which I inherited and now I have to enforce. And nowhere in there does it say that I'm responsible for data. It says that I'm supposed to array the data that comes in from the recipients, and OMB is supposed to tell the recipients what to send in.

Q. Have you exercised subpoena power yet?

A. No, we haven't. Could I envision doing it? Yeah, I could. I'm getting the subpoenas printed.

Q. Has there been any finding of any significant fraud or abuse?

A. No, and nor would I have expected [there] to be. Basically what you've got is money flowing out of the federal government down to states. Not a typical place where you see fraud. Where you first start to see it, where it starts to flow down further, particularly when it starts hitting contractors, that's where the tipping point is probably going to be. We [won't] have the information as to where that money's gone until Oct. 10. So I suspect, when you come back in November, I'm going to say to you, "[The Web site] went live, and we went bananas."

Q. There's been criticism over the lack of help for economically distressed areas, as called for in the act. Are you concerned it's not happening, and is it your job to point out that it's not happening? To push agencies toward doing a better job?

A. We certainly are going to be in a position of allowing the users of our Web site to look at that kind of thing. But I'm not going to come out with a press statement that says, "Money has not gone to disadvantaged neighborhoods." Nor is it my job, I don't think, to ensure that. I think the Web site should provide a place where people can go and see how to get a grant, how to get a loan, how to get a job; and it's going to clearly display the data [so] you can make those kinds of demographic cuts.

Q. How satisfied are you with the reaction from the administration, in terms of listening to advice you've had a chance to give?

A. I made the vice president two promises. No. 1 is that I view my job as telling them what they need to know, not necessarily what they want to know. The second thing is I will make them mad sometime.

Inevitably, something will go up on this Web site that will be embarrassing. There's no way for that not to happen. This board is ready for that. This board is committed to putting whatever the story is up there. An obvious goal that everybody talks about is jobs created — 3.5 million jobs created or saved. Jobs are going to be reported to us. I'm going to put up whatever that is. I don't care, particularly, whether the jobs shown on my Web site live up to what the administration says they're going to be. I'm just going to put up the facts.