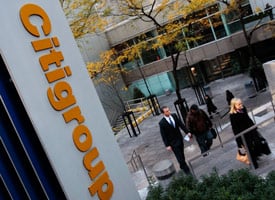 Should companies keep lobbying when taxpayers are footing the bill?

Citigroup seems to think so.

Its "government relations" operations are still going strong despite a very sweet deal from the government. In November, Citi won a guarantee on a pool of troubled assets valued at about $300 billion, plus another $20 billion from the TARP on top of an original investment of $25 billion.

Washington-based watchdog Taxpayers for Common Sense recently posted expenditure reports from lobbyists contracted by Citigroup from July to late September, before the bank received its big payout. Lobbyists spent nearly $2 million on behalf of Citigroup in that quarter. This is on top of the $6 million that Citigroup spent in the first half of the year, according to the non-profit Center for Responsive Politics.

"We have a government relations office," said Bell, who wouldn't comment further.

The question of whether businesses should be using taxpayers' money to influence government has come up before. Fannie Mae and Freddie Mac were ordered to stop their prodigious lobbying operations after being taken over by the federal government in September. AIG was initially undeterred by the fact that the government took 80 percent ownership stakes in the company, but halted its lobbying after angry senators all but demanded it.

Citigroup is not majority-owned by the government the way those companies are. But the scale of its bailout package still puts it in a different category from the many other banks that have received bailout funds, argued Stephen Ellis, vice president of Taxpayers for Common Sense.

"We are significant investors in Citigroup and are also holding a significant amount of risk if some of these assets fail," Ellis said. "The same guys who've got their hand out are also badgering and lobbying members of Congress to get other perks and sweetheart deals for themselves...Are we paying them to lobby ourselves?"

So what are they lobbying for? Unfortunately, little detail about the goals of Citigroup is provided in public expenditure reports. We'll know more about the company's total lobbying expenditures for the year when it posts its fourth quarter reports in late January.