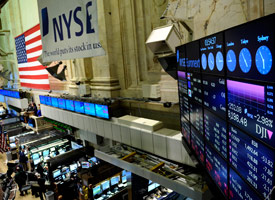 The TARP hasn't saved the nation's major banks, and the Obama administration doesn't know what to do to save them.

That is the unusually sober takeaway in the morning's major papers, following yesterday's sharp decline for banks in the stock markets. Bank stocks have been sliding all month: "The common stock of the major banks tracked by the Dow Jones Wilshire U.S. Banks Index has fallen roughly $287 billion in value since Jan. 2, a 43% decline in just over two weeks," reports the Wall Street Journal.

Not surprisingly, "fear" and "nationalization" are the words that crop up the most -- as in investors' fear of being wiped out by a government takeover. As the Journal puts it, "The fact that nationalization is considered by some to be possible and is roiling markets reflects the failures of repeated government interventions to stem a widening crisis of confidence in the banking system."

So far, the Treasury Department has spent roughly $230 billion pumping money into the nation's banks (billions more have gone to the auto companies and AIG). But as the Washington Post puts it, that money "did not succeed in stabilizing the industry," and according to unnamed Obama administration officials, it's "increasingly likely" that the remainder of the $700 billion in bailout money won't do the trick either.

So what next? The New York Times, Post and Journal all juggle a variety of alternative solutions: They range from the apparently leading contender of creating a "bad bank" to house the banks' toxic assets to nationalization.

The underlying choice there is whether to protect shareholders or taxpayers. The "bad bank" model would involve the government buying and holding the banks bad assets -- but there are worries the government would overpay. In another case of unusual bluntness, the Times reports:

If policy makers were even remotely honest, [financial industry] analysts said, they would force banks to take huge write-downs and insist on a high price in return for taking bailout money. For practical purposes, that could mean nationalization or partial nationalization for many banks.

But as the chorus of calls for nationalization grows, the Journal notes a reluctance among U.S. officials to take "the most extreme step -- nationalizing banks altogether -- worried about the government's ability to run them. The challenges of running Fannie Mae and Freddie Mac, the two large mortgage-finance firms the government took over last fall, are seen as evidence of that."