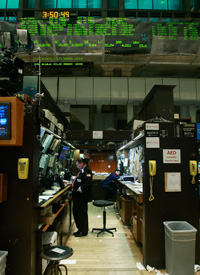 Something major happened yesterday, but you might have missed it. There was no press conference. Instead, the announcement came in a dense, three-paragraph statement, and the significant part came towards the end of a lengthy, particularly opaque second paragraph.

To paraphrase, it said: The Treasury Department will, sometime in the indefinite future, allow banks to exchange the government's bailout investments, which are in the form of preferred stock, for preferred shares that can convert to common stock. The government's role would then change from passive investor to voting stakeholder.

What does this mean? Does it mean that the government is "paving a road toward nationalization for the most troubled large banks," as the Washington Postputs it? The Delphic bureaucratese of yesterday's statement doesn't say so.

In fact, reading the tea leaves, the New York Timessees a different outcome: "The administration's strategy seems to point in the direction of stopping short of outright nationalization -- where the government takes control -- and stepping up regulatory scrutiny."

In other words, the government may be on the road to nationalization, but the plan is to pull to the shoulder and put on the hazard lights before we get there.

In another report, the Times gets a "senior administration official" to comment on what the new strategy means. See if you can read between the lines:

"We absolutely believe that our private banking system is best off being in private hands and we are trying our best to keep it that way...

"Given our involvement at this particular stage, there is an element, a possibility over time, that we will end up with some ownership of these institutions...This is really about aggressive anticipatory action. It is an acceptance that the future is uncertain, but that we can plan on a certain basis for it."

Trying to get administration officials to address what they're planning for the major banks with any degree of clarity seems to be the new sport in Washington. Here, for instance, is a taste of reporters trying to get White House Press Secretary Robert Gibbs to come clean yesterday:

Gibbs: ...The President believes, the economic team believe, and I would simply reiterate what I said here on Friday, that the President believes that a privately held banking system regulated by the federal government is the best way to go about this.

Q: So are you ruling out the possibility of taking a controlling interest in any of these large banks?

Gibbs: Let me repeat that I'm not going to get into discussing what individual banks might do with -- in relation to discussions with financial authorities or individual regulators...

Q: Can you say anything more definitive than that. And if not, why not?

Q: I can't help but notice you're reading from a prepared statement on --

Gibbs: Well, I'm reading exactly what I said Friday, in order to make sure that you all understand that I feel so good about what I said on Friday, I thought I'd try it again on Monday. Obviously, there are a lot of moving parts in the financial stability plan. But -- it may sound like a broken record, but it's the belief of the President and the economic team that the structure of a privately held system regulated by the government is the best way to do things.

Q: Why not say, "We are not going to nationalize the banking system"? Why not say it just like that?

Gibbs: Like I said, I felt so good about what happened on Friday, I thought I'd do it again.

How might the government exercise such control? How would these stock conversions work? If a bank such as Citigroup is already effectively under government control (as the Timespoints out, "Citigroup already relies on the government to finance its operations and insure hundreds of billions of risky assets"), how would that control change after the conversion?

So far, we've gotten answers to none of these questions, and it's unclear whether any will be forthcoming.