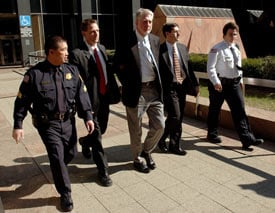 The Bush administration made a choice in the wake of 9/11. The FBI needed to dramatically increase its counterterrorism capabilities. To do that, it needed agents. Most of those agents came from FBI priorities now deemed less important – like white-collar crime.

The ramifications, as the Seattle Post –Intelligencer documented in a multi-part series last year, “The Terrorism Trade-Off,” were plenty and apparent. Among them was a dramatic drop in financial crime investigations like fraud and embezzlement cases.

But now that the nation is in the midst of a market crisis, the FBI is scrambling to regain lost ground, the New York Timesreported this weekend. Since 2001, the FBI reassigned about one third of the 1,700 agents who had been working white-collar crime cases. Now the FBI, “struggling” to find the resources to respond to the financial crisis, is “planning to double the number of agents working financial crimes by reassigning several hundred agents amid a mood of national alarm.”

Even a few months ago, the White House had reiterated the wisdom of shifting agents from the white-collar crime. When the administration’s 2009 budget again contained no new funding to boost the number of agents in the FBI’s crime-fighting squads, a White House official responded to criticism by saying "The assumption that how it was pre-9/11 is how it ought to be for all time is not the correct premise.”

The Times points to another possible reason for the FBI’s diminished performance in combating white-collar crime: concern from the administration that the recent high-profile investigations of Enron, WorldCom and others had gone too far. Several “former law enforcement officials” told the paper that “senior administration officials, particularly at the White House and the Treasury Department, had made clear to them that they were concerned the Justice Department and the F.B.I. were taking an anti-business attitude that could chill corporate risk taking.”

With the credit market nearly frozen, chilling corporate risk-taking is unlikely still a problem, and politically, the terrorism trade-off appears to no longer be acceptable. On an almost daily basis, news has leaked that the FBI is investigating one of the major financial institutions at the center of the crisis: Fannie Mae and Freddie Mac, AIG, Lehman Brothers, Washington Mutual, Countrywide. At last count, the FBI says it's investigating 26 national corporations related to the crisis.

It seems the philosophy has been to jump first and scramble for resources later. When the U.S. Attorney for Seattle announced that his office was investigating WaMu, he was candid about the reasons: “intense public interest” in the largest bank collapse in U.S. history.